Get observations and insights from Pioneer agronomists on the tour. Follow hashtag #PFTour20 on Pioneer social channels.

The corn and soybean crop in Southeastern Minnesota got off to a fast start in 2020. A majority of the corn crop was planted in April with soybeans not far behind. Corn is well into the R4 stage and soybeans are into the R5 stage. If GDU’s continue at the current pace, corn silage harvest could begin in late August/early September.

Corn crop was planted early in excellent conditions and we observed above average stands across the area. Corn rootworm was the biggest challenge mid season; we observed the highest pressure since 2012.  Scouting is on going to make management decision for 2021 crop.

Leaf disease has been present across the area. Disease spectrum has been a little different than usual for the area. Gray Leaf Spot is more prevalent than Northern Corn Leaf Blight due to above average temps in June and July, and Bacterial Leaf Streak has been observed traveling west across I90. Fungicide applications and dry conditions appear to be holding most fungal leaf diseases in check as we move toward September.

Overall the corn crop looks solid across southeast Minnesota, however additional moisture is needed realize the potential of the corn crop. 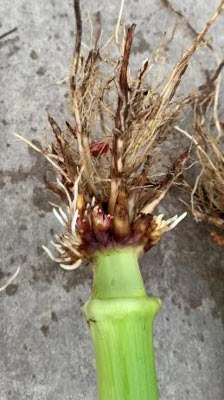 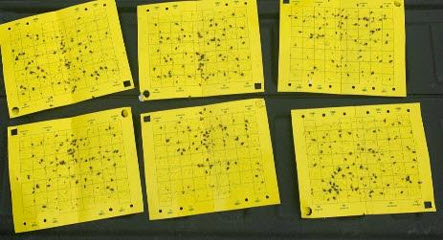 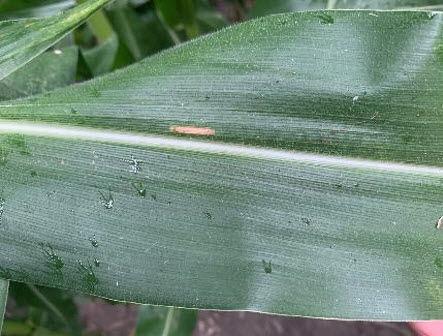 The big story of the soybean crop in Southeast Minnesota is planting date! Great early conditions, coupled with an increase in producers adding additional planters for soybeans so they can plant simultaneously with corn, has the crop maturing ahead of normal. The soybean crop flowered early and is taking advantage of a long grain fill period as a result of early planting dates. We have observed a lot of flowers and pod clusters in upper nodes, however we will need some August rain to finish out.

Insect pressure in soybeans has been light and variable across the area. Soybean aphid pressure has been low, thistle caterpillar pressure is much lower than 2019, a few Japanese beetles have been present late, and we have seen some spider mite pressure on field edges as conditions turned dry.

Disease pressure has been minimal to date in soybeans. Some very isolated white mold and sudden death syndrome has been observed across the area. Dry conditions appear to be holding back white mold pressure so far. 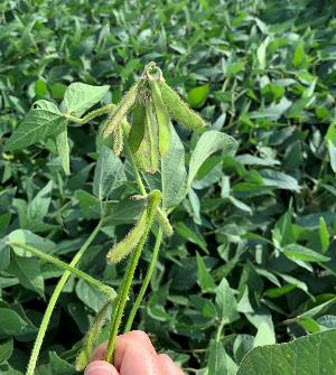 Pod cluster on an upper node of a soybean plant in Fillmore County Minnesota.

The 2020 growing season in NW IA really got off to a great start with excellent weather and planting conditions. Most growers experienced record planting pace with much of the corn and soybeans being planted in a period from April 20 - May 5. Shortly after planting finished up the weather turned cooler and wetter, delaying the emergence and early growth of the corn and soybeans. June brought a return to the warmer weather and a beginning to the dry environment we’re currently experiencing. We are currently 100 – 150 GDU’s ahead compared to the average.

Rainfall since planting has been between 4” - 5.5” inches behind the 50-year average for our area. Although we entered the 2020 growing season with very good soil moisture levels, the lack of rainfall in July has taken a major toll on the crop in NW IA. In the month of July alone we are about 2.5” behind average. These dry conditions have come at a very susceptible time for potential yield loss with both the corn and soybeans entering the reproductive stage of growth just as the drought was beginning. 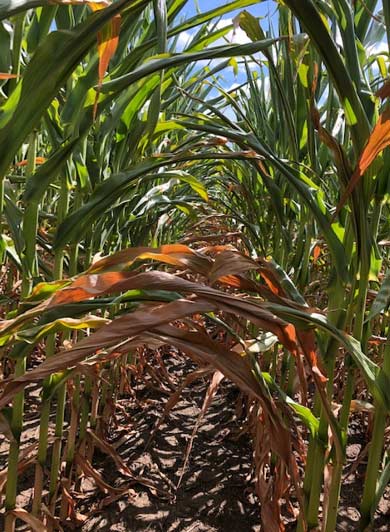 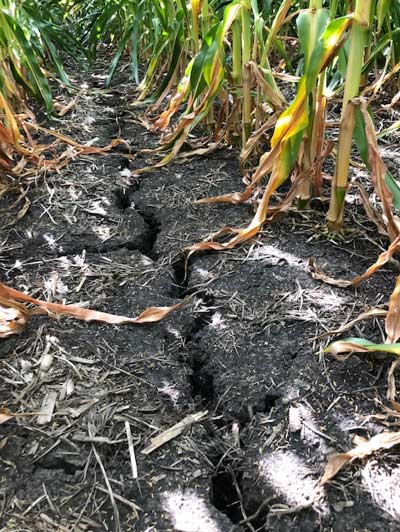 The corn is currently at the R3 (milk) stage of growth. The drought stress is evident on the developing corn ears and there is still more potential for kernel abortion. Later August rains may help to add some kernel depth and weight but much of the drought stress has already had a detrimental effect. Differences in hybrid drought tolerance, corn relative maturity, soil water holding capacity, and tillage systems will greatly affect yield levels at the end of the season. Pioneer AQUAmax® hybrids are maintaining high yield levels during this stressful time. 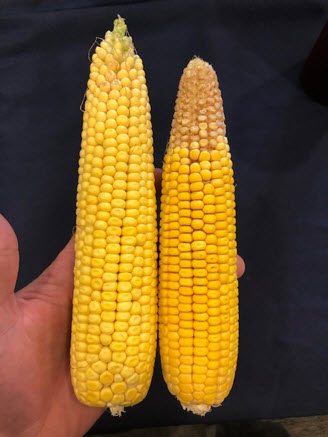 Corn Rootworm (CRW) feeding and overall populations have been very high during the 2020 growing season. Fields with a long history of corn-on-corn and rotated corn fields with unprotected roots are being overwhelmed with extreme CRW pressure. Aggressive larvae root feeding and high levels of adult beetles have been observed in NW IA. Pioneer brand Qrome® products have shown great efficacy against CRW populations. Additional multifaceted management tactics will have to be utilized in subsequent years to help control CRW.

Soybeans were well on the way to great yield potentials before the drought set in. With the majority of the soybeans planted in April we began flowering a week to ten days ahead of normal. Although there were many potential flower clusters in late June and early July, the soybeans have accelerated their reproductive stage and most soybeans are currently in the R5 (Beginning Seed) stage. The dry weather has hindered flowering and any potential rains later in August will only affect seeds/pod and seed size. Soybeans aphids have not been much of an issue, to date, but there have been many other sub-economic pests feeding on the soybeans. Grasshoppers, leafhoppers, green cloverworm, thistle caterpillar, and flea beetles have all been common pests in the soybean canopy.

A crop with great potential in the first half of the 2020 growing season has already realized yield losses in the latter half of the growing season.  Persistent lack of rain and temperature stress will continue the potential for loss with this crop. 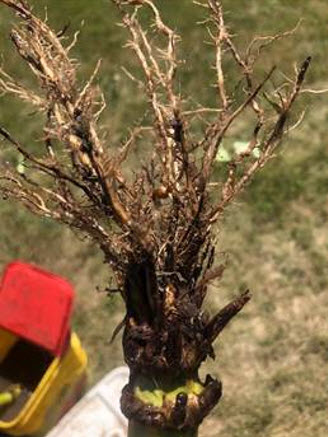 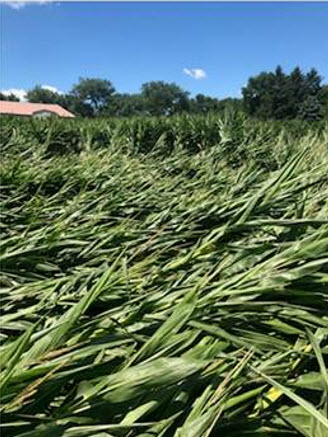 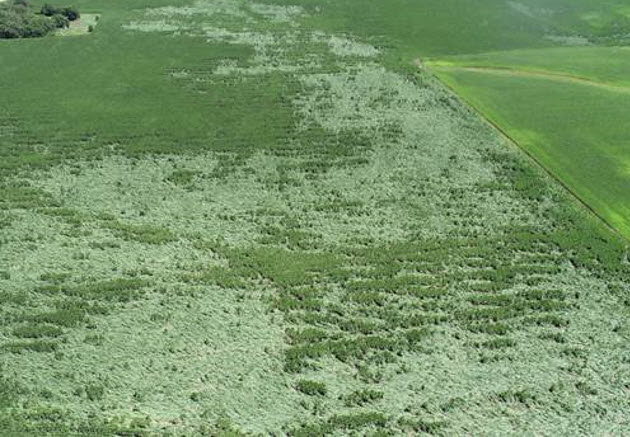 Product performance in water-limited environments is variable and depends on many factors such as the severity and timing of moisture deficiency, heat stress, soil type, management practices and environmental stress as well as disease and pest pressures. All products may exhibit reduced yield under water and heat stress. Individual results may vary.

Q (Qrome®) - Contains a single-bag integrated refuge solution for above- and below-ground insects. The major component contains the Agrisure® RW trait, the YieldGard® Corn Borer gene, and the Herculex® XTRA genes. In EPA-designated cotton growing counties, a 20% separate corn borer refuge must be planted with Qrome products. Qrome® products are approved for cultivation in the U.S. and Canada. They have also received approval in a number of importing countries, most recently China. For additional information about the status of regulatory authorizations, visit http://www.biotradestatus.com/
Herculex® Insect Protection technology by Dow AgroSciences and Pioneer Hi-Bred. Herculex® and the HX logo are registered trademarks of Dow AgroSciences LLC. YieldGard®, the YieldGard Corn Borer Design and Roundup Ready® are registered trademarks used under license from Monsanto Company.
Liberty®, LibertyLink® and the Water Droplet Design are trademarks of BASF.
Agrisure® is a registered trademark of, and used under license from, a Syngenta Group Company. Agrisure® technology incorporated into these seeds is commercialized under a license from Syngenta Crop Protection AG.