Average plant population for corn in Ohio is continuously changing with rates increasing about 280 plants/acre/year according to the National Agricultural Statistics Service. Plant populations in Ohio have increased 14% during the past 10 years and are closely associated with grain yield increases. In recent years, more questions have been posed concerning the impact of increased residues associated with higher plant populations in no-tillage and reduced-tillage cropping systems. Among farmers, a widespread perception exists that that these greater residues, especially in no-tillage systems, adversely affect crop establishment and reduce yields.

Effects of tillage systems on hybrid performance have received considerable attention since the introduction of no-tillage systems in the early 1970s. Seed companies have also identified hybrids with traits (including early season stress tolerance and disease resistance) that enhance performance in high-residue cropping systems. However, the performance of recently developed hybrids in no-tillage and reduced-tillage cropping systems, in which plant populations are often much greater than in the past, warrants renewed attention. Pioneer has worked to develop corn hybrids with improved drought tolerance in order to provide better yield stability on variable and droughty soils.

Hybrids with higher levels of drought tolerance may provide greater yield stability for corn planted on heavy clay soils in no-tillage continuous corn. Corn crops planted on such soils using no-tillage are often susceptible to late season drought stress, especially when soil moisture is excessive at planting. Improving our understanding of the response of newer hybrids to plant population under different tillage and rotation systems and across different soil types will help improve our understanding of hybrid management and positioning.

Research was conducted at Ohio State University research farms near South Charleston in southwest Ohio and Hoytville in northwest Ohio from 2013 to 2015.

1All Pioneer products are hybrids unless designated with AM1, AM, AMT, AMRW, AMX and AMXT, in which case they are brands.

Did Hybrid Response to Cropping Sequence Differ in No-Till and/or Conventional Tillage Systems? 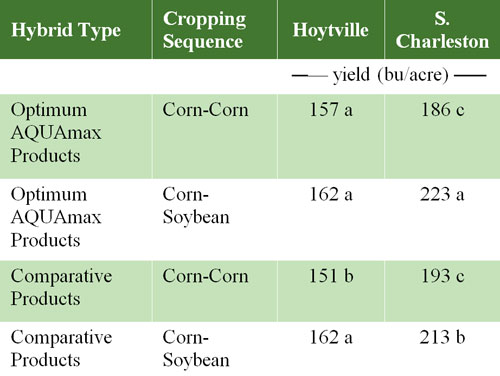 Did Hybrid Response to Plant Population Differ in No-Till and Conventional Tillage Systems in Continuous Corn?

A difference in yield between the two corn products was evident in two of the six experiments with yields of Pioneer® hybrid P0993HR, averaged across tillage and plant population, greater than Pioneer® P0965AM1™ brand corn. Although P0965AM1™ was characterized as having more stable “defensive” yield performance across varying environmental conditions, its yields were either less or comparable to those of P0993HR. Although P0993HR was characterized as having the higher yield potential under favorable growing conditions, its yield in 2013 was not different from P0965AM1™ at S. Charleston where yield levels were 40% greater than Hoytville. The absence of a yield difference between P0993HR and P0965AM1™ in 2013 may be related to greater root lodging™, which was evident at both locations (32% vs. 17% at S. Charleston and 36% vs. 22% at Hoytville), associated with P0993HR compared to P0965AM1.

Continuous no-till corn and high corn plant populations — the experimental treatments expected to result in greater residue accumulation — did not affect crop performance consistently. After three years of residue accumulation, corn yields in 2015 were similar for no-till and conventional tillage. In the study evaluating hybrid response to rotation and tillage, post-harvest residue cover in the conventional tillage continuous corn plots was about 30 to 40% of the coverage in the no-tillage continuous corn plots at S. Charleston and Hoytville in 2013 and 2014. No differences in percent residue cover were evident on plots following corn or soybean at S. Charleston in 2013 and 2014 and Hoytville in 2014. At Hoytville in 2013, residue cover was slightly greater in plots following corn.

Although hybrids differed in plant height and maturity, differences in plot residue cover associated with hybrids were detected in only one site-year. At S. Charleston in 2015, the residue cover associated with Pioneer® P1352AMX-R™ brand corn, a full season product, was greater than Pioneer® P0210AM-R™ brand corn, an earlier maturing, shorter product. In the study evaluating hybrid responses to plant population and tillage, residue cover in 2014 and 2015 in the conventional tillage continuous corn plots was about 30 to 40% of the coverage in the no-tillage continuous corn plots at S. Charleston and Hoytville. Plant population effects on post-harvest residue were only present at Hoytville in 2013. Plant population affected percent residue cover, but the differences in residue coverage between plant populations did not correspond to changes in plant density. The post-harvest residue cover measurements for 34,000 plants/acre exceeded those of the lower and higher plant densities. 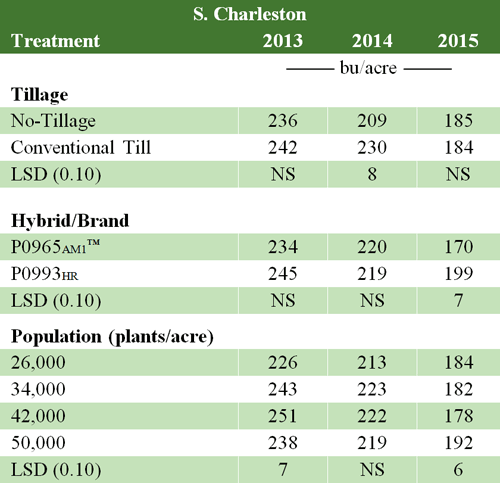 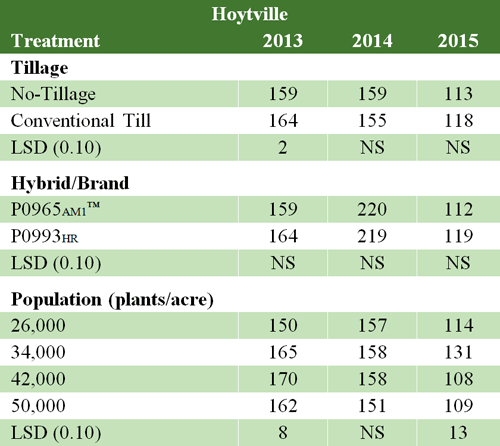 No differences in plot residue cover were associated with hybrids, although they differed in plant height (P0993HR greater than P0965AM1™). Past descriptions of P0965AM1™ suggested that this hybrid’s shorter plant stature might result in less plant residue to manage following harvest. Measurements of residue cover biomass collected early in 2014 and 2015 did not detect differences in the quantity of crop residue produced by the two products at high and low plant populations in the conventional and no-till treatment. Outcomes may be expected to differ under less favorable growing conditions and with greater residue accumulation over a longer time period, especially in no-tillage with high plant populations.

What Are the Overall Management Implications of the Study?

There was no advantage to selecting hybrids based on interaction with the tillage, cropping sequence, and plant population. Drought-tolerant hybrids performed better in different rotations at different locations, but the variation in hybrid performance makes it difficult to produce a specific recommendation. Hybrids with defensive and high-yield designations showed similar responses to tillage and plant population. Corn yields averaged across locations, tillage, and hybrids were about 7% greater following soybean than corn. The yield advantage associated with crop rotation was the same or greater for corn grown using no-tillage than conventional tillage. Residue accumulation was not consistently greater in the no-tillage, continuous corn, and high plant population treatments.

Research conducted by Peter Thomison, Alex Lindsey, and Allen Geyer; Horticulture and Crop Science Department, The Ohio State University as a part of the Pioneer Crop Management Research Awards (CMRA) Program. This program provides funds for agronomic and precision farming studies by university and USDA cooperators throughout North America. The awards extend for up to four years and address crop management information needs of Pioneer agronomists and customers and Pioneer sales professionals.

PIONEER ® brand products are provided subject to the terms and conditions of purchase which are part of the labeling and purchase documents.