Green stem syndrome is the term applied to soybean plants that retain green stems after pods mature. Leaves and petioles may also stay green. Plants affected by green stem syndrome may be distributed randomly or clustered in patches in the field. When green stems are numerous, yield and seed quality may be reduced, harvest may be delayed, and combining is more difficult. Delaying harvest until green stems mature can result in over-drying and shattering in normal plants.

Green stem syndrome appears to be widely distributed across the major soybean growing areas of North America, and also appears to be occurring more frequently in many areas. This problem may result from a number of causes; including viral infections, insect feeding and certain environmental factors or stresses. Recent research studies have shown progress in reconciling these multiple causes and developing a better understanding of the disease. This Crop Insights describes soybean green stem causes, relationship to viruses, current research and possible management. 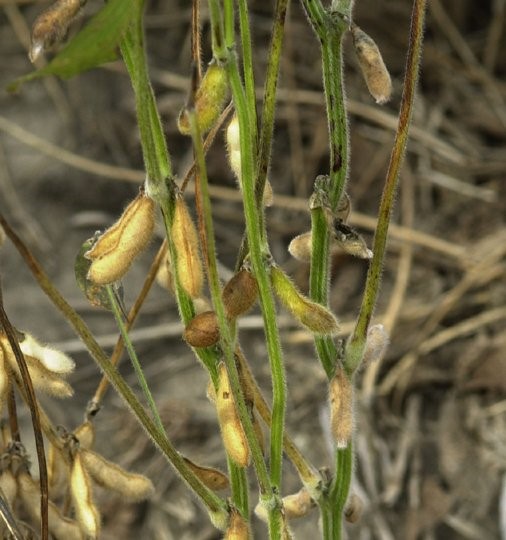 Several viruses are known to cause green stem symptoms in soybeans, including bean pod mottle virus (BPMV), soybean budblight caused by tobacco ringspot virus (TRV), soybean mosaic virus (SMV) and others. Field surveys have shown that soybean viruses have been increasing in recent years, just as green stem syndrome has been increasing.

Bean pod mottle virus is a disease of legume plants that is vectored by bean leaf beetle and other beetles. Symptoms include green to yellow mottling of leaves in the upper plant canopy. In severe infections, leaves may be puckered and distorted. Late in the season, infected plants may have green stems after pods have matured and retain their petioles after leaflets have dropped. Alternate hosts of BPMV include alfalfa and clovers. 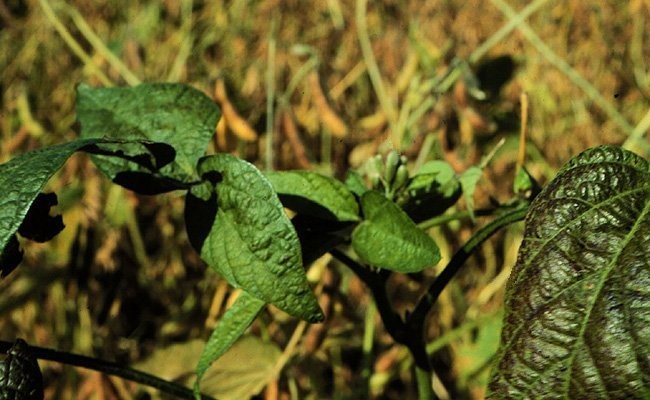 Crinkled, curled leaves, stunted plants, and green stems may indicate a viral disease such as bean pod mottle or soybean mosaic. Pods are small, distorted and fewer in number.2

Soybean budblight is caused by the tobacco ringspot virus. Symptoms include bending or “hooking” of the terminal growth of the plant, proliferation of leaves and bud tissue, and stunting. Plants have a bushy appearance, leaves are rough and wrinkled, and pods are poorly developed or aborted. Infected plants tend to remain green after other plants have matured. Thrips have been implicated in the spread of the virus. Several weed species act as alternate hosts.

Symptoms of soybean mosaic virus are similar to those of bean pod mottle virus. Leaves show mosaic patterns, curled margins and crinkling. Plants are stunted and pods may be abnormally small and flattened. Yield is reduced and seed coats show a brown to black mottling. Soybean aphids are vectors of SMV.

Other viral diseases such as soybean dwarf virus may also cause green stem symptoms. However, some symptomatic plants, upon testing, are free of any known viruses. Conversely, many plants found to contain viruses do not show green stem symptoms. The variety of causes for green stem symptoms, as well as the sporadic expression of symptoms by virus-infected plants, have made it much more difficult for researchers to investigate this problem.

As vectors of viruses, many insects have a part in causing green stem syndrome. These include bean leaf beetles, thrips and soybean aphids. However, other insect feeding may cause this problem apart from viral infection. Evidence from Missouri suggests that green stink bugs in high numbers on soybeans can lead to “delayed senescence” or green stem syndrome (Sweets and Bailey, 2002). These insects have piercing-sucking mouthparts that allow them to penetrate soybean leaves, stems and pods. Damage may include stunting, distorted plant growth, pod abortion and yield reduction. On close inspection, plants are found to have high numbers of feeding punctures. More research is being conducted to better understand the role of these insects in green stem syndrome.

Growers and researchers have observed a link between certain environmental factors and occurrence of green stem syndrome. Low soil moisture, low plant populations and delayed planting are conditions most often associated with the syndrome. Because these conditions do not always result in green stems, however, other factors must also be involved. For example, the occurrence of other conditions along with drought could trigger the response. Or perhaps the timing, duration or severity of drought stress could be the determining factor. More research is needed to understand how these factors trigger green stem and to develop management solutions to the problem.

Recent research studies in the US and Japan have utilized depodding treatments to further elucidate the causes of green stem syndrome in soybeans.

In a study conducted at the University of Kentucky (Egli and Bruening, 2006), the researchers noted that a common thread links the various reported causes of green stem syndrome. That common thread is the potential to reduce the number of pods and seeds. This reduction likely results in increased carbohydrate and nitrogen supply to the stem and roots, which could result in stems staying alive and green when other plants are senescing normally.

To test this theory, researchers compared non-treated plots with plots in which 25% or 50% of pods were removed to reduce pod load. Relatively late pod removal at the R6 stage of development effectively prevented plants from setting additional pods later. Pod counts at maturity confirmed that pod loads were near target, averaging 27% and 48% below the control in the depodding treatments. Researchers then focused on evaluating maturation of pods and stems. Also, to better understand the mechanisms by which stems stay green or turn brown, they evaluated the nutrient content of stems.

Depodding consistently increased soluble sugar, starch and nitrogen levels in the stems at the time of pod maturity. Green stems were associated with these higher levels. A linear relationship was found between soluble sugar levels in stems and delays in stem maturation.

Green stem symptoms developed on all varieties when only 25% of the pods were removed, but they were much more pronounced with 50% pod removal.

The authors concluded that symptoms normally associated with green stem syndrome could be induced by significantly reducing pod number at R6. (Symptoms included stems remaining green while leaves and petioles dropped, pods matured, and seeds dried to harvestable moisture levels.) This provides a common explanation for the many proposed causes of the green stem problem – reducing the pod load. This helps to reconcile the various green stem causes found in the literature, including viruses, insect feeding and environmental stresses. 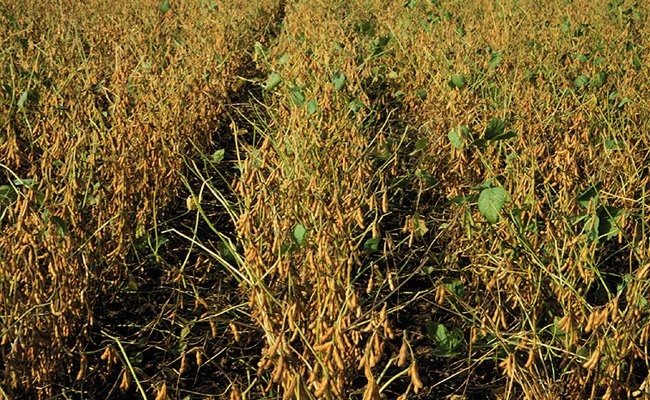 Field view of soybeans with green stem syndrome. In this case, many affected plants are also retaining green leaves.2

The authors noted that their study could not identify consistent variety differences in the response to pod removal. This was partly due to the limited number of varieties tested. They surmised that variety variation may occur more in response to the cause of the pod reduction (especially regarding disease or insect injury), rather than as an effect of pod reduction itself.

Because green stem syndrome has been increasing in soybeans grown in Japan, a study was conducted in 2003 and 2004 to help determine the cause of this problem and a cultivation method to reduce it (Shimada et al., 2005). In an experiment conducted on potted plants, researchers studied the effects of a 50% depodding treatment on photosynthate distribution and root hydraulic resistance in the plant. The results demonstrated that more photosynthate was distributed to the stem and root with a half-depodded plant compared to a control plant. Root hydraulic resistance (the capability of roots to absorb water) declined in the control plants during senescence, but not in the depodded plants.

According to the authors, it appeared that the higher photosynthate supply to the root and stem delayed their senescence, and therefore the depodded plants kept higher water absorption and higher stem moisture at pod maturity. Higher stem water content was related to green stem expression in soybean plants.

Green stem syndrome has a variety of causes, and success-ful management will depend on knowing the correct cause. In cases where environmental factors such as drought stress, late planting and low plant populations trigger green stem, irrigation, timely planting, and establishing better stands are possible solutions.

When green stem is triggered by green stink bug feeding, management of this insect may be helpful. However, treatments must be applied when leaves and pods are green, and feeding is taking place. Here is a link to the OMAFRA information on green stink bug in soybean:

When green stem syndrome results from viral infection, management is difficult. Managing viruses usually requires controlling the insects that vector them and/or controlling the alternate host plants of the virus. Research has not conclusively established that treating for bean leaf beetle can control the bean pod mottle virus. However, more information on this approach can be found at the link below:

Controlling other insects such as thrips or soybean aphids to reduce viral infection and resultant green stem syndrome has not been sufficiently studied. OMAFRA recommendations are available for treating soybean aphids to prevent feeding damage, but not for controlling the viruses they vector.

Delaying harvest to allow green stems to dry sufficiently is rarely an acceptable solution to the green stem problem. According to Egli and Bruening (2006), delays of 3 or 4 weeks in stem maturation common in their study clearly demonstrate the dilemma faced by producers with green stem syndrome. Delaying harvest by this much would usually result in exceptionally low seed moistures and greatly increased shattering and harvest losses. Though green stems dried faster in some varieties some years, the variability in stem drying means that predicting a suitable harvest date for affected fields would be nearly impossible. The most realistic solution would likely be to harvest when pods are mature and simply endure the problems created by green stems, according to the authors.

2 Images courtesy of the University of Wisconsin.

The foregoing is provided for informational use only. Please contact your Pioneer sales professional for information and suggestions specific to your operation. Product performance is variable and depends on many factors such as moisture and heat stress, soil type, management practices and environmental stress as well as disease and pest pressures. Individual results may vary. Pioneer® brand products are provided subject to the terms and conditions of purchase which are part of the labeling and purchase documents. CI060302 (200831)