One of the most critical factors in achieving high corn yields is establishing a sufficient population density to allow a hybrid to maximize its yield potential. Historically, population density has been the main driver of yield gain in corn. Improvement of corn hybrid genetics for superior stress tolerance has allowed hybrids to be planted at higher plant populations.

The continual increase in optimum plant density throughout the hybrid corn era has been well-documented by research. An analysis of Pioneer plant population data from the past 30 years has shown that this trend continues up to the present day (Ciampitti, 2018a). Additionally, this analysis showed that the range of the agronomic optimum plant density increased over time from the 1987-1991 period to the 2012-2016 period (Figure 1). This finding shows that modern hybrids not only need more plants to attain maximum yields, but also that the stability of modern hybrids has increased relative to older hybrids. Farmers have taken advantage of the higher stress tolerance of modern hybrids by pushing plant populations higher. The linear increase in average plant populations used by corn growers in North America tracks closely with the linear increase in average corn yields over the same time period.  Since 1986, average corn seeding rates used by growers in North America have increased by about 275 seeds/acre per year, while U.S. average yields have increased by over 2 bu/acre per year (Figure 2). 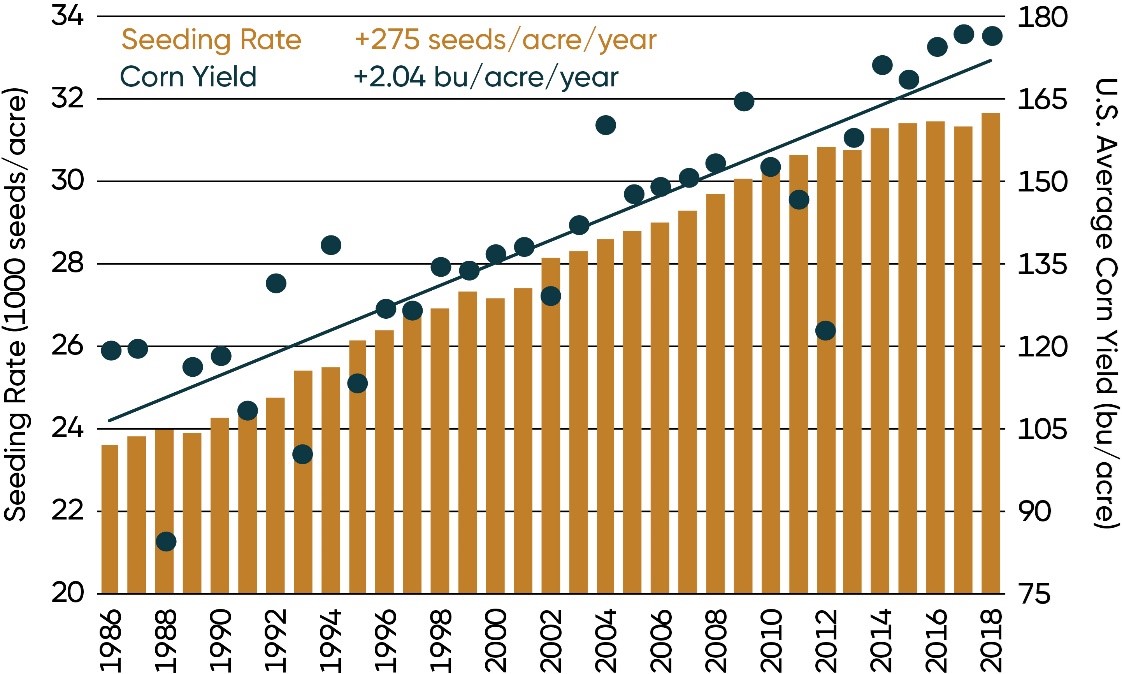 Corn plant populations vary by geography due to differences in growing environments and productivity levels, but populations have generally trended upward over time. The ten corn-producing states for which the USDA collects corn plant population data have all had positive linear trends over the past 15 years (Figure 3). Wisconsin and Kansas had the smallest increases over this time period, with an average gain of around 125 plants/acre/year, while Indiana, Illinois, Missouri, and Ohio had the largest increases at over 300 plants/acre/year.

Pioneer has been conducting plant population studies with corn hybrids for over three decades. Research studies have been conducted at over 320 locations throughout the U.S. and Canada in the last 6 years (Figure 4). Pioneer researchers target representative environments based on maturity zone, expected yield (high or low), specific stresses, and other unique location characteristics. Over the past several years, Pioneer has also conducted plant population research focused specifically on lower-yielding water-limited environments (Figure 5). 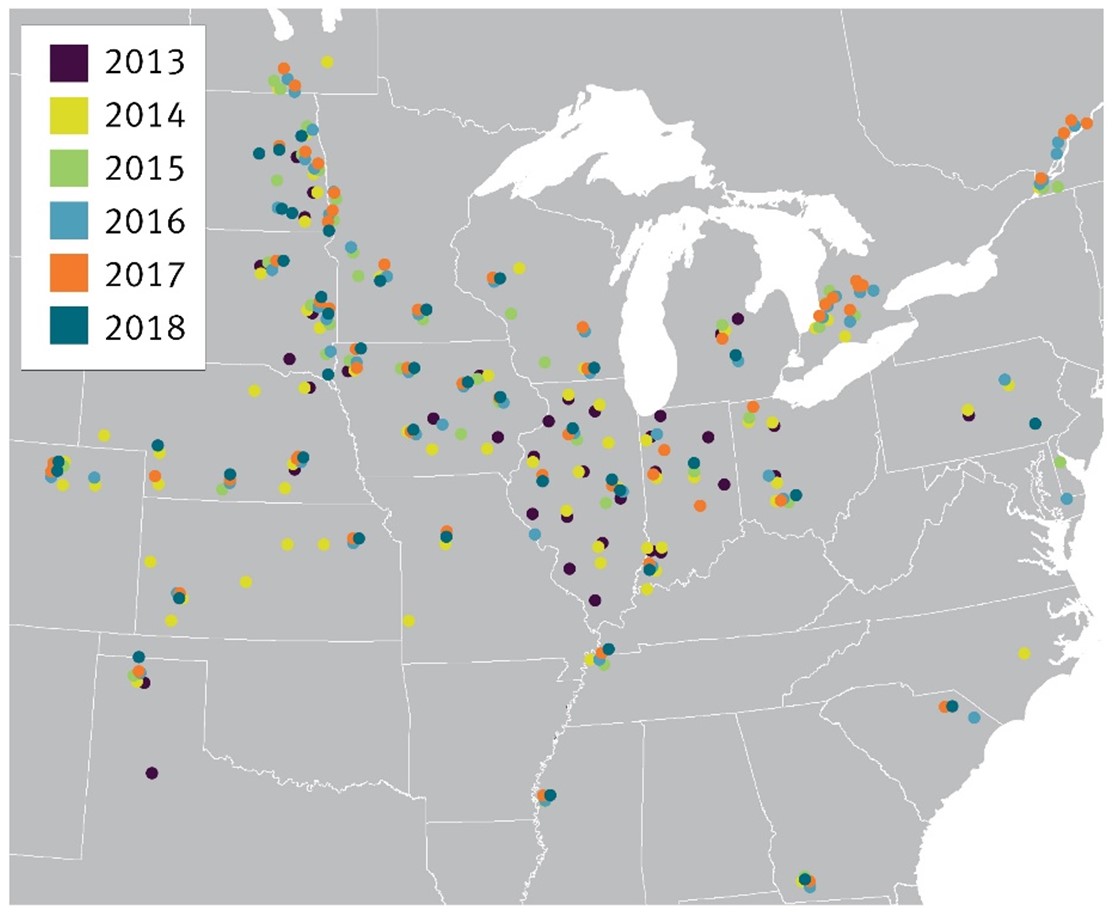 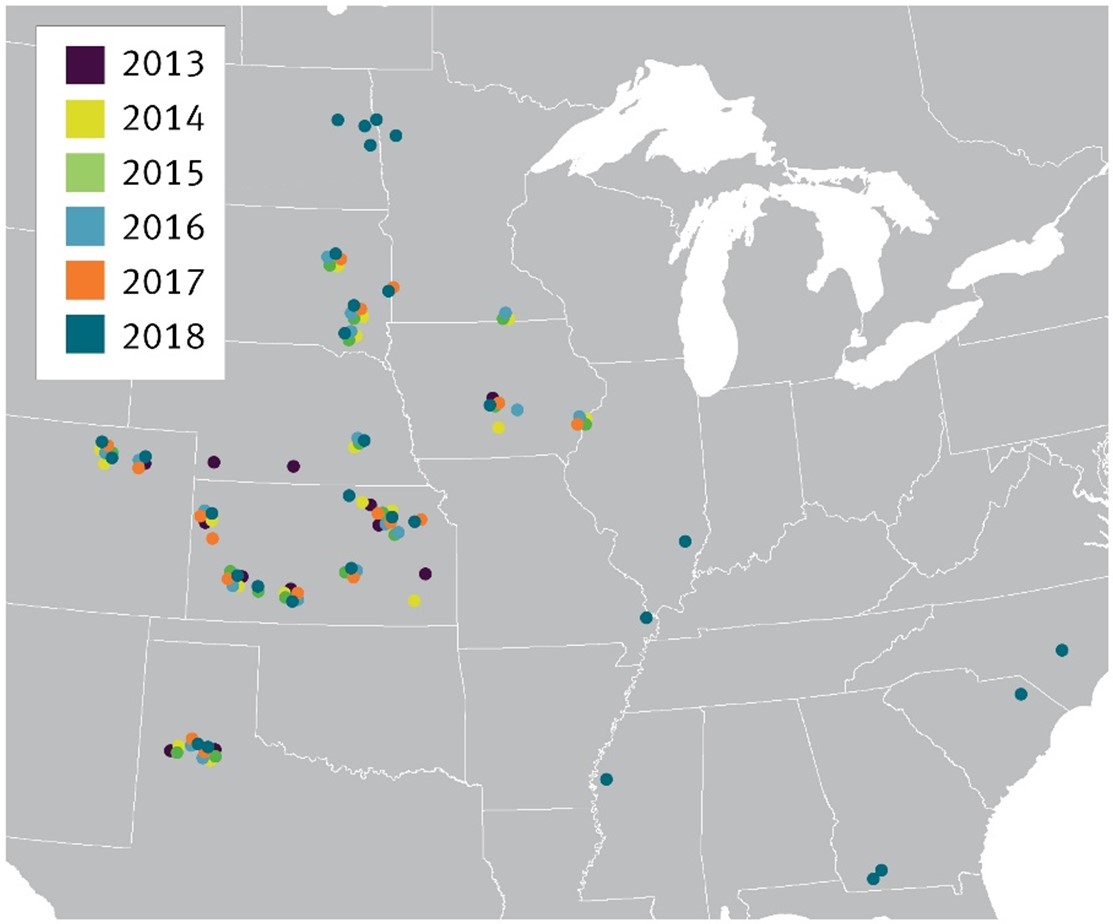 Additionally, hundreds of on-farm Pioneer agronomy seeding rate trials are conducted each year comparing multiple corn products at up to four seeding rates at each location. These trials have considerable value for local observation, evaluation and refinement of plant population agronomic response. Farmers can use the multi-year and multi-location results to identify the best potential planting rates specific to their hybrid, location, and management practices.

As yields increase with each increment of higher seeding rate, a point is reached where the yield benefit from the next addition of seed no longer exceeds the cost of the seed. That point is the optimum economic seeding rate. By definition, it is the seeding rate that generates the most income when seed cost and grain price are factored in. The economic optimum seeding rate will always be less than the seeding rate at which yield is maximized. 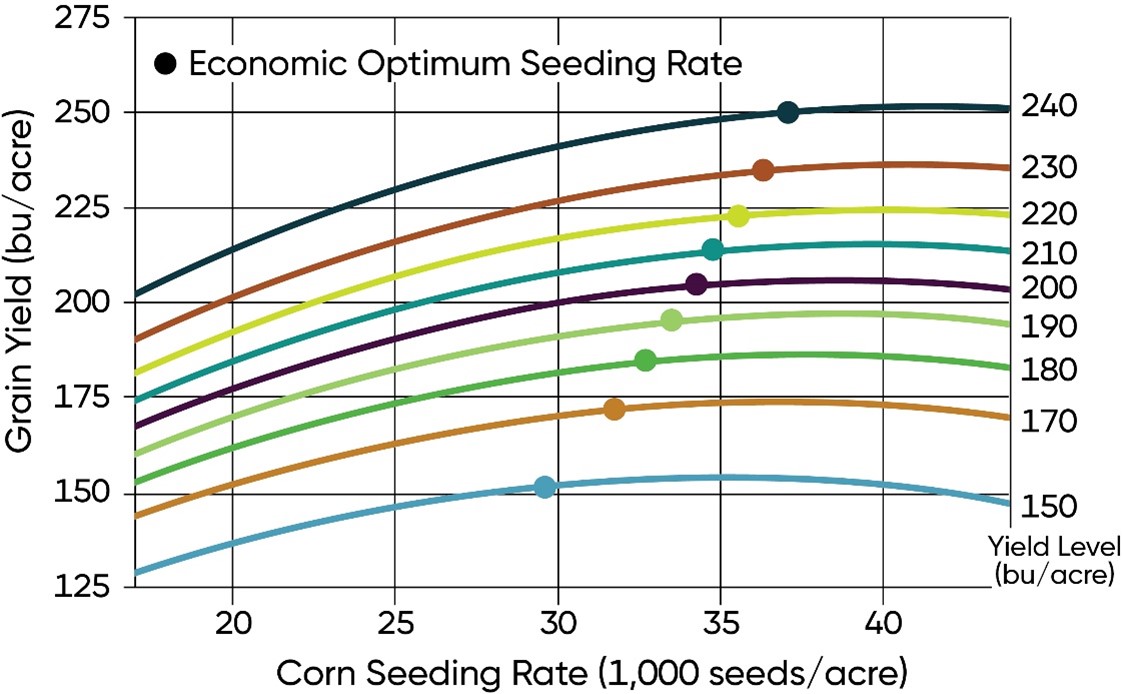 Averaged across all hybrids tested. Economic optimums based on a corn rain price of $3.50/bu and a seed cost of $3.00 per 1,000 seeds; assumes 5% overplant to achieve target population. 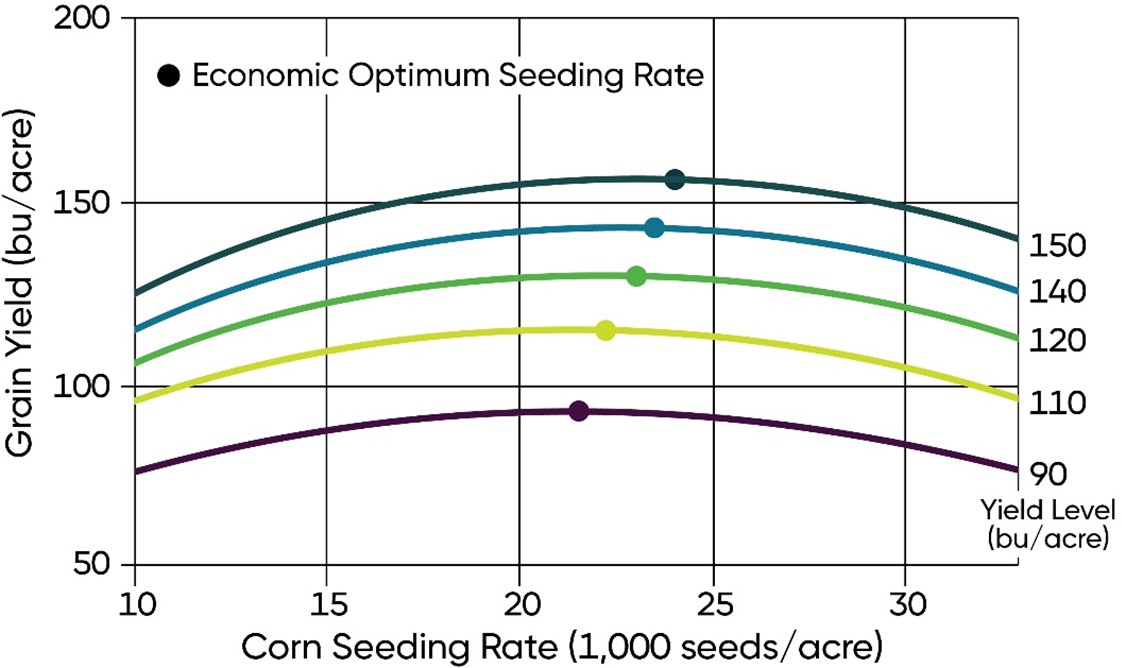 Averaged across all hybrids tested. Economic optimums based on a corn grain price of $3.50/bu and a seed cost of $3.00 per 1,000 seeds; assumes 5% overplant to achieve target population.

The Planting Rate Estimator has the ability to display population response curves for a wide range of yield levels, which can provide guidelines for creating variable rate seeding prescriptions. It is possible to display plant population response curves at 10 bu/acre increments for all yield levels where there was a statistically significant response based on the available research data. The yield levels available for display will vary among hybrids based on the available research data. Users also have the option of selecting a “Water-Limited Sites” version of the planting rate estimator, which includes data from studies conducted in drought environments in the Western U.S. Farmers should use the Planting Rate Estimator as an initial guide and work with your Pioneer sales professional for refinements based on local observations and on-farm trials. 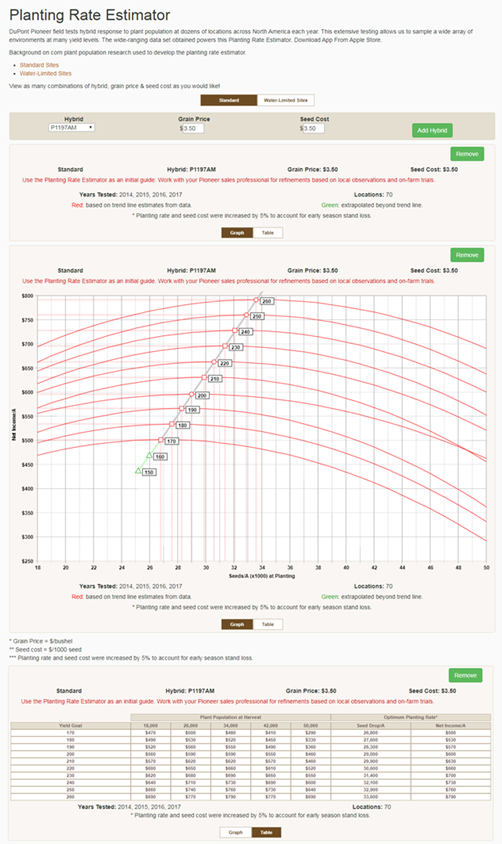 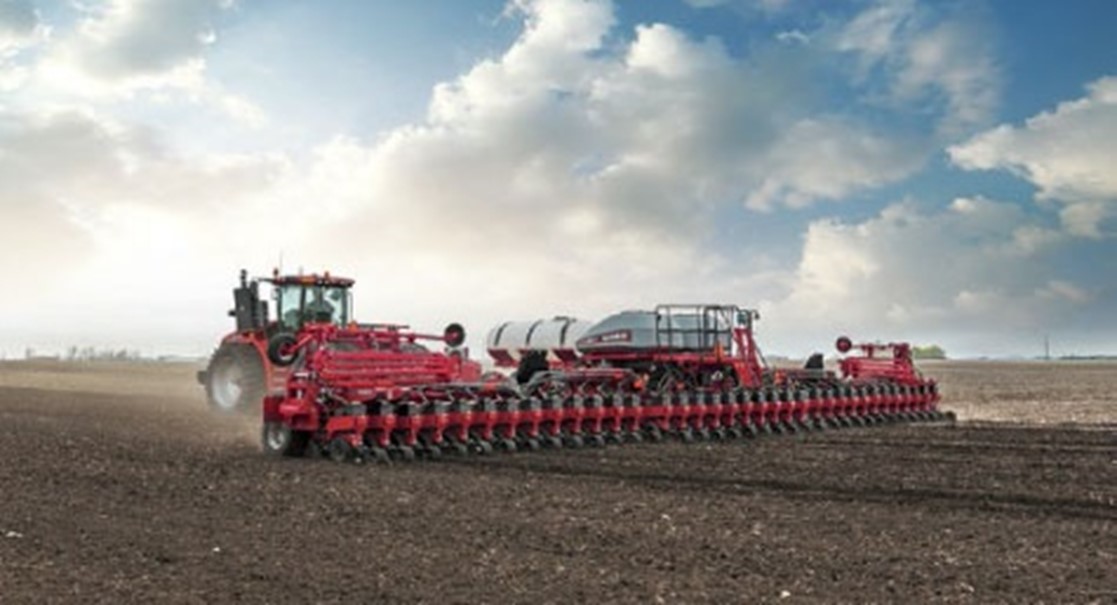 Challenging growing environments may reduce corn plant populations below optimum levels. These conditions can occur when planting into no-till or high-residue seedbeds, or cloddy or compacted soils. Soil-borne diseases and soil insects can also diminish stands. All of these factors can interact to challenge stand establishment, and effects are magnified when planting early into cold, wet soils. Therefore, consider the following points when choosing your seeding rate:

Ciampitti, I. 2018a. Trends in Optimum Plant Density and Yields Gains for Corn in North America. Pioneer Agronomy Research Update.

The foregoing is provided for informational use only. Contact your Pioneer sales professional for information and suggestions specific to your operation. Product performance is variable and subject to any number of environmental, disease, and pest pressures. Individual results may vary. Pioneer® brand products are provided subject to the terms and conditions of purchase which are part of the labeling and purchase documents.

Photo on page 4 courtesy of CNH.