Sulfur is one of the 16 elements essential to crop production. It is typically considered a secondary macronutrient (along with calcium and magnesium) but is essential for maximum crop yield and quality. Sulfur is often ranked immediately behind nitrogen, phosphorus, and potassium in terms of quantity taken up. Sulfur is a component of the amino acids cysteine and methionine making it essential for protein synthesis in plants. Plants contain a large variety of other organic sulfur compounds, such as glutathione, sulfolipids and secondary sulfur compounds which play an important role in physiology and protection against environmental stress and pests.

Sulfur fertility has historically not been a major concern for growers on most soils, as soil organic matter, atmospheric deposition, manure application and incidental sulfur contained in fertilizers have typically supplied sufficient sulfur for crop production. However, reductions in the amount of sulfur contributed by these factors combined with increased sulfur removal with greater crop yields have made sulfur deficiencies more common.

Yellowing between leaf veins is a symptom of sulfur deficiency in corn.

Sulfur can exist in soils in a number of organic and inorganic forms. In well-drained agricultural soils, organic sulfur typically accounts for over 95% of the total sulfur, although this ratio can vary greatly with soil type. Organic sulfur is converted to inorganic sulfate through mineralization, making it available for plant uptake. Mineralization is the primary source of plant-available sulfur in non-fertilized soils. Soil organic matter content greatly affects the amount of sulfur available to the crop through mineralization. One percent organic matter will supply about 2-3 lbs of available sulfur annually.

The microbial processes responsible for sulfur mineralization are highly dependent upon soil conditions. Warm, moist soils are much more favorable for soil microbial activity than cold or saturated soils. Earlier planting into colder soils may reduce the availability of sulfur during early growth stages. This may result in sulfur deficiency symptoms early in the growing season that will eventually disappear as sulfur becomes more available due to increased microbial activity as soils warm up.

Like nitrate, sulfate is an anion, making it mobile in the soil and subject to loss through leaching. Frequent rainfall events can move sulfate downward in the soil profile making it inaccessible to plants, particularly young plants with small and shallow root systems. In saturated soils, sulfate can be reduced to hydrogen sulfide and lost to the atmosphere.

Inorganic sulfur contained in soil minerals is typically much less abundant than organic sulfur in most agricultural soils. However, reduced inorganic forms such as sulfides can be an important source of sulfur in soils where they are contained in the parent material. Reduced sulfur compounds must be oxidized to sulfate by soil microorganisms or chemical processes in order to be available for crop uptake.

Industrial pollution, despite its myriad negative effects, has provided a benefit to agricultural production in some areas as a source of sulfur. Sulfur is emitted into the atmosphere primarily through burning of fossil fuels. These emissions can travel long distances in the atmosphere and are eventually deposited as sulfur dioxide or as sulfates, often in precipi-tation. Air pollution control efforts have greatly reduced the amount of sulfur emissions and, consequently, the amount of sulfur deposition from the atmosphere. This change has been greatest in eastern regions of the U.S. (Figure 1) and Canada (Figure 2), where deposition from industrial emissions formerly contributed large amounts of sulfur to the soil. Little change has occurred in western states and provinces where atmospheric deposition was never a substantial source of sulfur in the first place.

Manure application can be an important source of sulfur for soils. Most livestock manure contains approximately 0.25% to 0.30% sulfur. Sulfur content is greater, however, in sheep manure (0.35%) and poultry manure (0.50%). Reductions in the number of livestock operations have eliminated manure as a source of sulfur in many areas.

Irrigation water can be an important source of sulfur for crop production, in some cases providing enough sulfur to meet crop requirements. However, water sources can vary widely in sulfate content. Growers should test their water supply to accurately determine sulfur concentration. 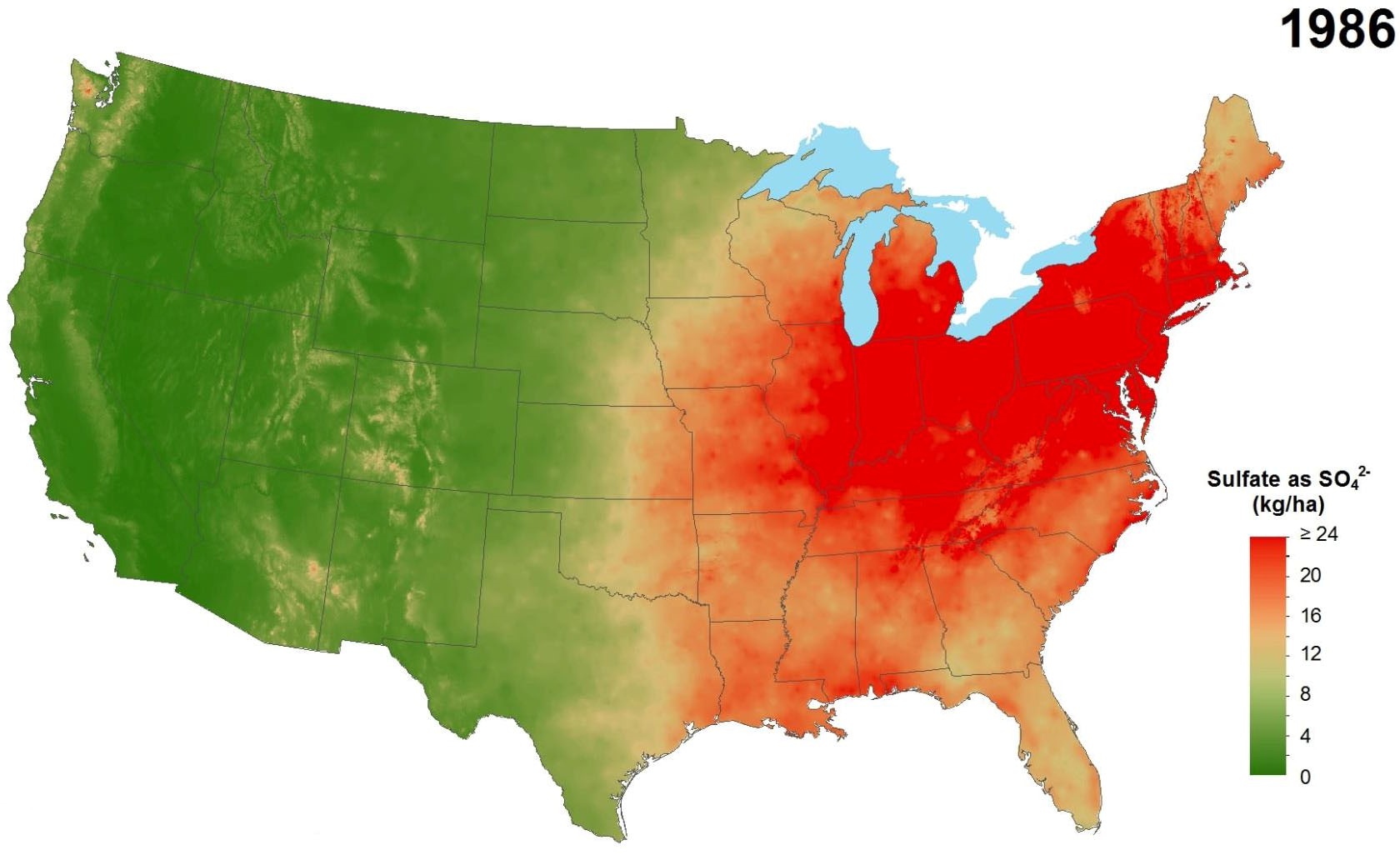 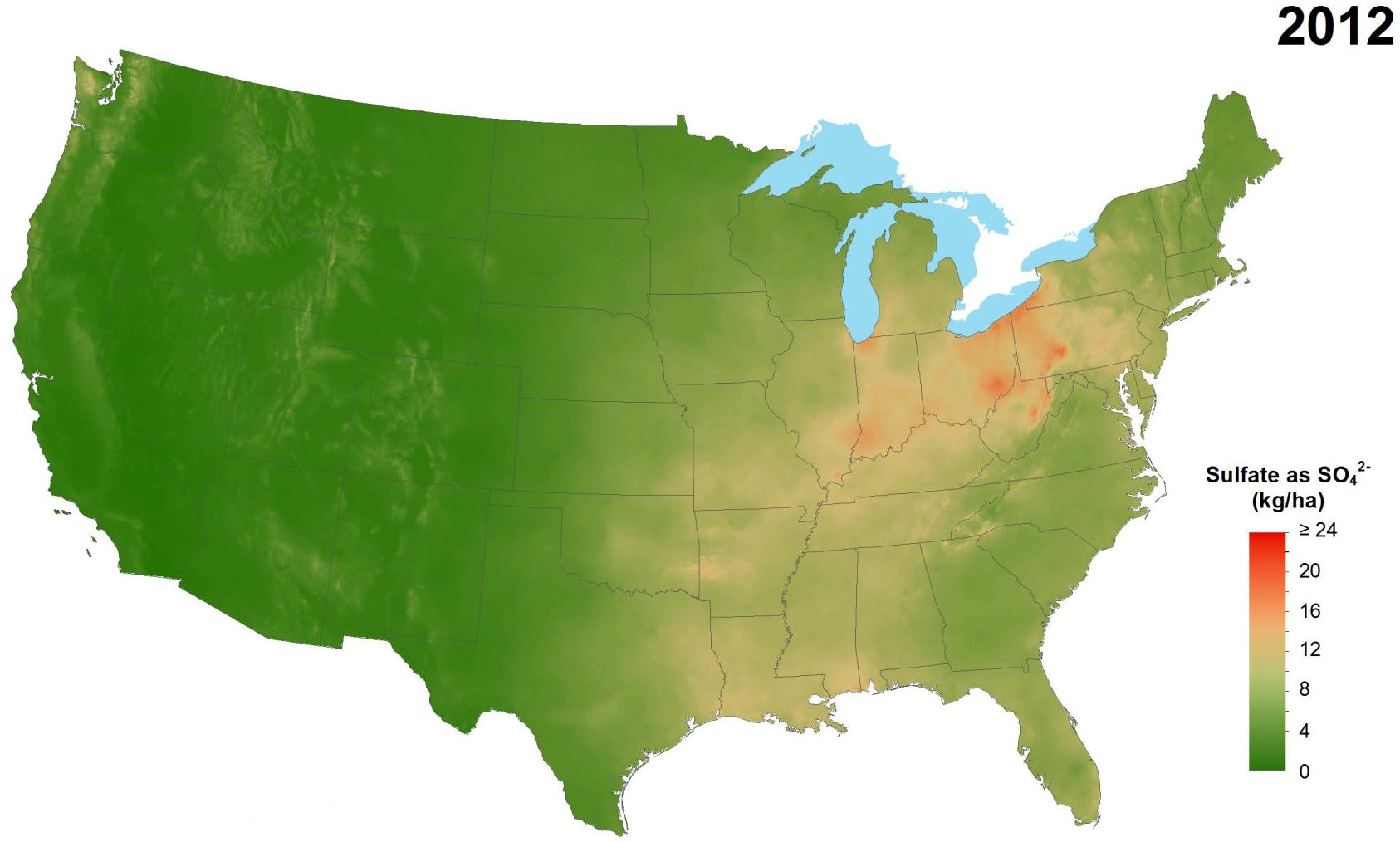 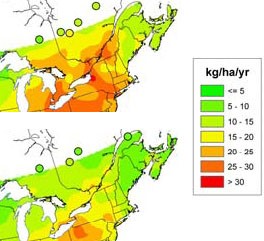 The increasing use of high analysis fertilizers has decreased the amount of incidental sulfur applied to crops. Some older fertilizers contained a substantial amount of sulfur as a byproduct of the production process. An example is ordinary superphosphate (0-20-0) which contains 11-12% sulfur in addition to phosphorus, whereas newer triple superphosphate (0-46-0) contains less than 3% sulfur.

The sulfur contents of several common fertilizers are listed in Table 1. Sulfate-containing fertilizers provide sulfur in a form that is readily available for plant uptake and can be used to quickly correct a sulfur deficiency. Elemental sulfur must be oxidized in the soil before it can be taken up by plants, which increases the amount of time needed for it to be available but provides sulfur in a slow-release form that is less susceptible to leaching losses than sulfate fertilizers.

The rate of elemental sulfur oxidation is influenced by fertilizer type and environmental factors.  Particle size and sulfur percentage of the fertilizer granule influence the rate of oxidation. Typically, the smaller the particle size and the lower the S content of the fertilizer, the faster that sulfur source will oxidize.  Since oxidation is a biological process, soil temperature, moisture, pH, and organic matter percentage also influence the rate of oxidation.  Oxidation rates are fastest in warm, moist, alkaline soils with higher organic matter levels.

Some fertilizers have the potential to lower soil pH, especially sulfur and phosphorus combined with the ammonium-based nitrogen fertilizers, like ammonium sulfate, monoammonium phosphate (MAP) and diammonium phosphate (DAP). The oxidation process of sulfur releases acidity, as does the nitrification of ammonium (conversion of ammonium to nitrate in the soil by bacteria). Monitoring pH with soil testing is recommended to determine lime needs if sulfur and ammonium-containing fertilizers are used often.

Soil buffering capacity and the uptake of anions and cations by plants can reduce these equivalents, but growers should be aware of the potential effects of fertilizers on soil pH.

Determining if Sulfur is Deficient

Plants deficient in sulfur will exhibit visual symptoms. Sulfur deficiency in corn can result in a general yellowing of the plant, similar to nitrogen deficiency; or as interveinal chlorosis, similar to magnesium or zinc deficiency. Sulfur is not easily translocated in plants, so symptoms will appear first and be most pronounced on the younger, upper leaves. Deficiencies of mobile nutrients, such as nitrogen, will appear first on the lower leaves as nutrients are remobilized to growing plant tissues.

Sulfur deficiency symptoms follow a similar pattern in other crops such as soybean, wheat, and alfalfa, with yellowing of the plant, beginning with the youngest tissue. In canola, early season deficiency symptoms include yellowing between leaf veins, cupped leaves, and stunting. Late season symptoms are slender, cupped leaves that may be purple along the edges, delayed flowering, and pale yellow or white flowers.

Historically, sulfur deficiencies were thought to be a concern strictly on sandy soils, but in recent years, deficiencies have become more prevalent across a variety of soil types. Sulfur deficiencies may appear on hilltops or slopes where soils are eroded and low in organic matter. Deficiencies are more common on sandy or other low organic soils because of their reduced ability to supply sulfur and losses due to leaching.

Sulfur deficiency symptoms are typically not uniform across the field, more often appearing in spots or streaks. Symptoms may appear in places where soils are colder or wetter, such as low spots or high residue areas. This is because the rate of sulfur mineralization and the supply of available sulfate are reduced in those areas.

Because of the similarities between sulfur deficiency symptoms and other nutrient deficiency symptoms, a plant tissue analysis may be necessary to determine if observed symptoms are indeed due to a lack of sulfur. A soil test is available for sulfur; however, soil testing procedures for nutrients contained in organic matter are not highly reliable in making fertility decisions. For this reason, soil testing for sulfur is only recommended on sandy soils. Soil tests should include a topsoil sample as well as a subsoil sample to a depth of at least two feet.

Sulfur as Part of a Fertility Program

Yield response to sulfur fertilizer varies greatly across crops, soil types, and geographic regions; therefore, growers should check university recommendations to get the best information for their specific area and cropping system. Alfalfa and canola have relatively high sulfur requirements (Table 3), and are more likely to need supplemental sulfur, particularly when grown on sandy soils.

Historically, corn on fine-textured soils rarely responded to sulfur fertilization, therefore regular application was not recommended unless it was determined that the soil supply is insufficient to meet crop needs. Prior to 2005, a yield response to applied sulfur was observed in less than 2% of corn and soybean trials conducted over more than 40 years in Iowa. (Sawyer and Barker 2002; Sawyer et al., 2015).

However, more recent Iowa State studies have found much more frequent yield benefits in corn, with a positive yield response to sulfur fertilization at 17 of 20 sites in 2007, 11 of 25 sites in 2008, and 6 of 11 sites in 2009 (Sawyer et al. 2009, 2010). Among responsive sites in 2007 and 2008, the average yield increase with sulfur fertilization was 15 bu/acre on fine-textured soils and 28 bu/acre on coarse-textured soils. A University of Illinois study in 2009 found yield responses in corn ranging from 0 to 50 bu/acre (Fernandez 2010). These results demonstrate the need to consider local soil characteristics in determining a sulfur fertility plan, but also show that yield response can be substantial in cases where sulfur is deficient.

Soil sulfate tests and ear leaf tissue tests have shown limited predictive value in determining the likelihood of a yield response to sulfur in corn (Sawyer et al., 2015). Iowa State research has shown some degree of relationship between yield response to applied sulfur and soil organic matter, with yield responses observed at a higher frequency in soils with less than 3.5% organic matter.

Yield response to sulfur has been researched less extensively in soybean than in corn; however, research has generally shown that soybeans are less likely to benefit from applied sulfur. A yield response was observed in 2 out of 13 replicated strip trials conducted in Iowa from 2011-2013 (Sawyer et al., 2015). A fertility program for corn that includes sulfur would likely reduce the risk of yield loss due to sulfur deficiency in rotated soybeans as well.

Fernandez, F. 2010. Do I need to Apply Sulfur to My Corn Crop? University of Illinois. The Bulletin. Issue 1, Article 10.