Each leaf stage is defined according to the uppermost
leaf whose leaf collar is visible. The first part of the collar that is visible is the back, which appears as a discolored line between the leaf blade and leaf sheath. The characteristically oval-shaped first leaf is a reference point for counting upward to the top visible leaf collar as demonstrated in Figure 1. 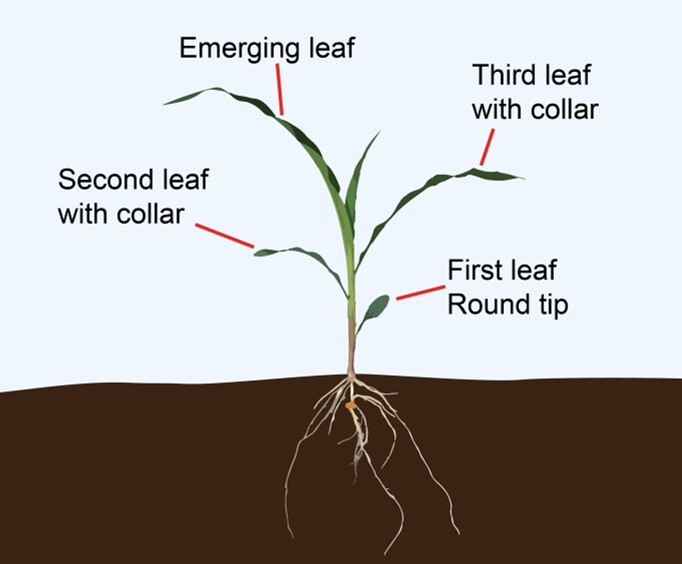 Beginning at about V6 increasing stalk and nodal root growth combine to tear the small lowest leaves from the plant. Degeneration and eventual loss of the lowest leaves results. To determine the leaf stage after lower leaf loss, split the lower stalk lengthwise (Figure 2) and inspect for the internode elongation. The first node above the first elongated stalk internode generally is the fifth leaf node. This internode is usually a little less than ½ inch in length. This fifth leaf node may be used as a replacement reference point for counting to the top leaf collar. 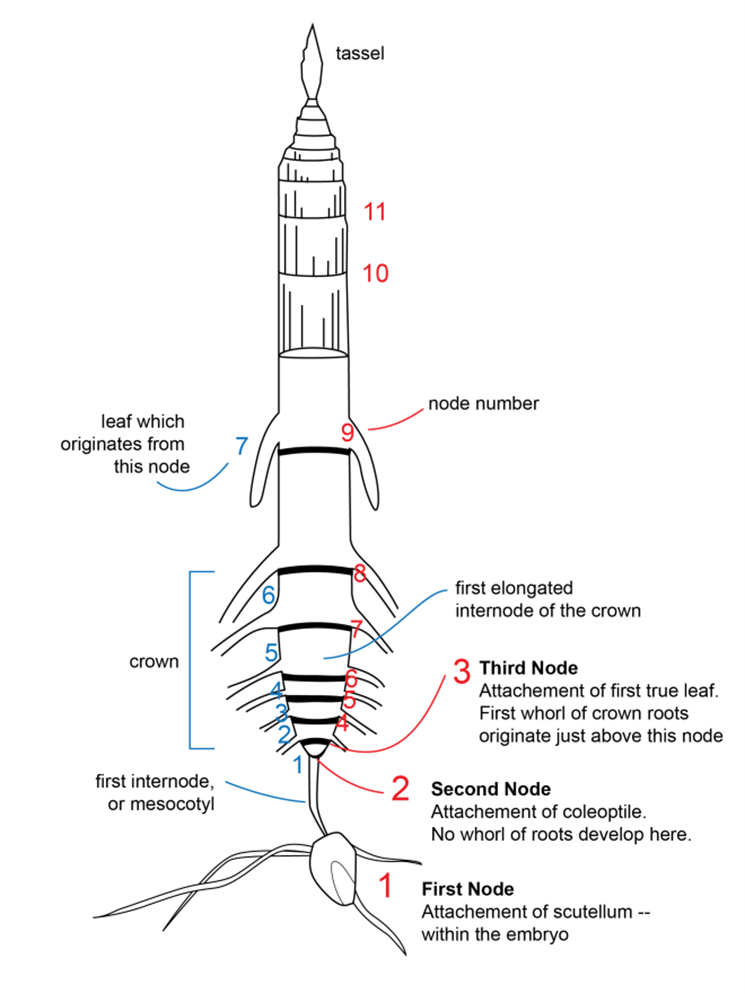 Some herbicide labels refer to the stage of development of corn based on plant height or leaf stage. Corn height is generally defined as “free standing” or the height of the arch of the highest leaf that is at least 50% developed. Corn height is less accurate than leaf number in determining growth stage.

Tassel (VT) – bottom-most branch of tassel completely visible and silk has not emerged.

Blister (R2) – kernels white on outside, clear liquid inside.

Emergence may occur as rapidly as 4 or 5 days after planting in warm moist soil or may take 3 weeks or more in cool soils. A new leaf will appear about every 3 days during early growth, while later leaves developing during warmer conditions may appear in 1 to 2 days. Full season hybrids in the central Corn Belt typically can produce 21 to 22 leaves. Earlier maturing hybrids will produce fewer leaves. The rate of development after pollination is given in Table 2. Bear in mind that development may be faster than suggested here under higher than normal temperatures or slower under lower than normal temperatures.

The foregoing is provided for informational use only. Please contact your Pioneer sales professional for information and suggestions specific to your operation. Product performance is variable and depends on many factors such as moisture and heat stress, soil type, management practices and environmental stress as well as disease and pest pressures. Individual results may vary. Pioneer® brand products are provided subject to the terms and conditions of purchase which are part of the labeling and purchase documents. FF160524 (200727)