Growth stages of soybeans is divided into vegetative growth stages (V) and reproductive growth stages (R). Subdivisions of the V stages are designate numerically as V1, V2, V3, through V(n); except the first two stages, which are designated as VE (emergence) and VC (cotyledon stage). The last V stage is designated as V(n) where (n) represents the number for the last node stage of the specific variety. The (n) stage will fluctuate with variety and environmental differences. The vegetative stages and reproductive stages are designated numerically with their common names in Table 1.

Table 1. Vegetative and Reproductive Stages of a Soybean Plant*

*This system accurately identifies the stages of a soybean plant. However, all plants in a given field will not be in the same stage at the same time. When staging a field of soybeans, each specific V or R stage is defined only when 50 percent or more of the plants in the field are in or beyond that stage.

The V stages (node stages) following VC are defined and numbered according to the uppermost fully developed leaf node. A fully developed leaf node is one that has a leaf above it with unrolled or unfolded leaflets. In other words, the leaflet edges have begun to unroll and are no longer touching. The V3 stage, for example, is defined when the leaflets on the 1st (unifoliolate) through the 4th node leaf are unrolled. Similarly, the VC stage occurs when the unifoliolate leaves have unrolled.

The unifoliolate leaf node is the first node or reference point from which to begin counting upward to identify upper leaf node numbers. This node is unique in that the unifoliolate (simple) leaves are produced from it on opposite sides of the stem and are borne on short petioles. All other true leaves formed by the plant are trifoliolate (compound) leaves borne on long petioles and are produced singularly (from different nodes) and alternately (from side to side) on the stem. 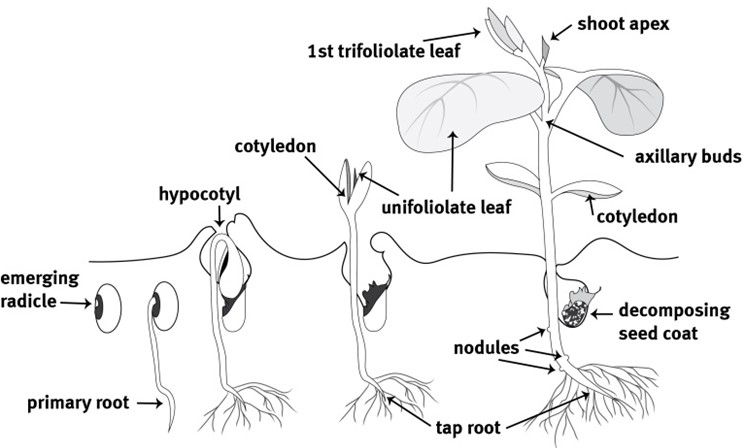 Subdivisions of the reproductive stages are designated numerically R1 through R8 and described below.