Phomopsis stem canker is a disease caused by a cryptogrammic fungus with two different forms, the teleomorph, Diaporthe helianthi Munt. Cvet (Ascomycete: Diaporthaceae), and the anamorph, Phomopsis helianthi Munt. Cvet. (Adelomycete: Sphaerioïdaceae). This fungus is the species most commonly responsible for this disease, but recently other species of this genus have been described as phytopathogens on sunflower (D. gulyae, D. kongii, D. masirevicii and D. novem).

P. helianthi was described as a new fungal species in the former Yugoslavia in the late 1970s. Since then, it spread widely to surrounding countries. At this moment, it is responsible for significant yield loss in Serbia, France, Hungary, Austria, Romania, Bulgaria, Russia, Ukraine, USA, Argentina and Australia.

The parasite infects the leaves, spreading to the stem and causing wilting, premature drying and stem breakage (Figure 1). Yield reductions of up to 40 % have been recorded in Europe and the oil content may also be reduced by 15–25%.

Figure 1. General overview of a severe field infection of Phomopsis helianthi in a sunflower crop.

The first symptoms usually occur after flowering as small, brown, necrotic, triangular spots on leaf margins on the lower or middle leaves. Spots spread along the main leaf veins towards the petiole. Leaves wilt and die and the fungus invades the stem via the petiole, causing small, brown, sunken spots around the leaf axil. Spots rapidly expand and may cause girdling of the stem. Lesions turn grey to brown with time, rotting the pith adjacent to the lesion and weakening the stem which may subsequently lodge (Figure 2). The brown or black stem lesions at the nodes are characteristic of the disease.

Stem symptoms extend into long, brown to black cankers up to 15-20 cm and cause wilting and premature senescence of infected plants. Small black pycnidia containing asexual conidia form on the lesions and can be visible with naked eye or under a 5-10x lens. Severity of the disease depends on susceptibility of the sunflower cultivar, the plant growth stage and environmental conditions. 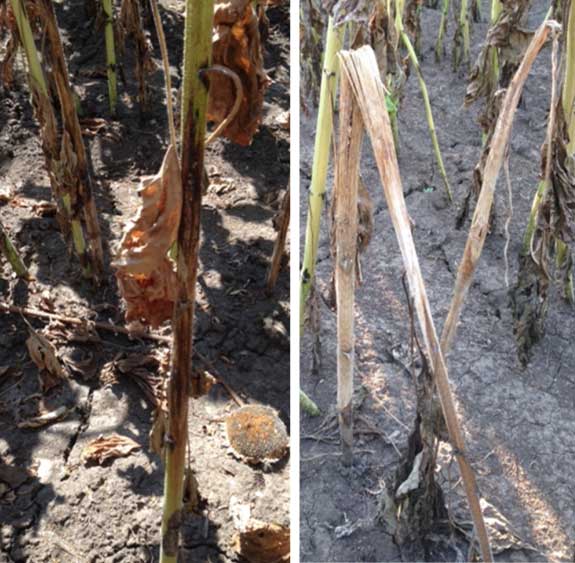 The fungus overwinters predominantly as perithecia of Diaporthe in infected plant debris and on sunflower seeds (see steps A and B in Figure 3 with the biological cycle). Perithecia develop over the winter on infected plant tissues and usually mature by late spring. Ascospores are produced in perithecia (see steps C and D) at temperatures above 10ºC and are rain splashed or windblown onto leaves. The infection starts on the margins of lower leaves. A brown necrotic area develops and may be bordered by a chlorotic margin (see step E). The infection spreads down through the veins to the petiole and finally to the stem (see step F). The mycelium attacks the parenchyma, xylem, and phloem tissues behind the node, where a characteristic stem lesion forms.

These symptoms can look similar to those of Verticillium leaf mottle, but with Verticillium, the necrotic areas are between the veins. Stem lesions usually do not appear until flowering. Girdling stem lesions result in wilting and render the plant more susceptible to lodging (see step G). The disease may be difficult to identify when both Phoma and Phomopsis are present. In that case Phoma produces black lesions whereas Phomopsis lesions are more brownish. In these cases, microscopic identification of the fungus is necessary.

Ideal conditions for disease development include frequent or abundant rainfall, particularly from budding to flowering. Temperatures of 20-25ºC are ideal, but the disease can develop at a wider temperature range, and rainfall is more important than temperatures. 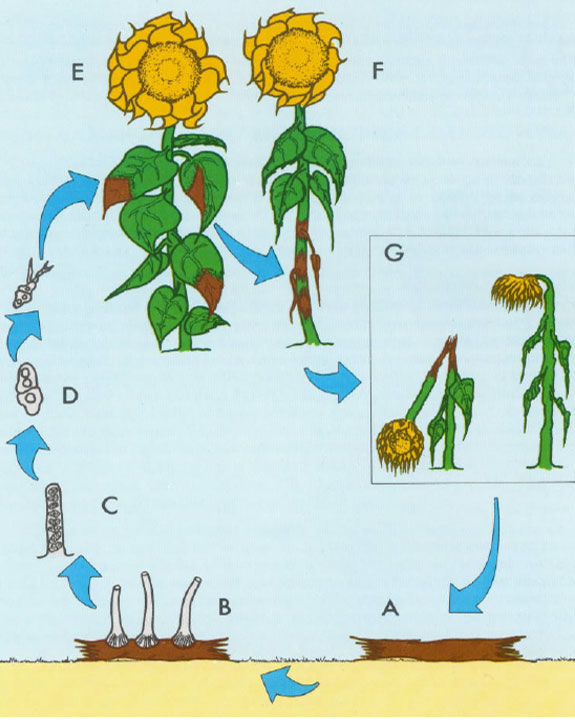 Rotation out of sunflower for up to 5 years is ideal but not always practical. The complete host range of several Diaporthe/Phopmopsis sp species is unknown, and it seems that it can survive on both live and dead crop and weed hosts.  Burying crop residue with deep tillage can be an effective management tool. Because the fungus survives on infected sunflower debris in the field and the upper soil layer, methods such as plowing (deeper than 5 cm) and disking can kill the overwinter inoculum, thereby reducing disease incidence and severity for next season.

High planting densities favor infection by the pathogen because of the high humidity and the reduced vigor of plants. Excessive plant population and nitrogen levels should be avoided.

Complete genetic resistance against P. helianthi does not exist in sunflower hybrids. However, tolerant hybrids are available and should be used as part of an integrated control approach (Figure 4). For more information on hybrids adapted to local conditions with the appropriate level of tolerance to Phomopsis canker, please contact your local Pioneer representative. 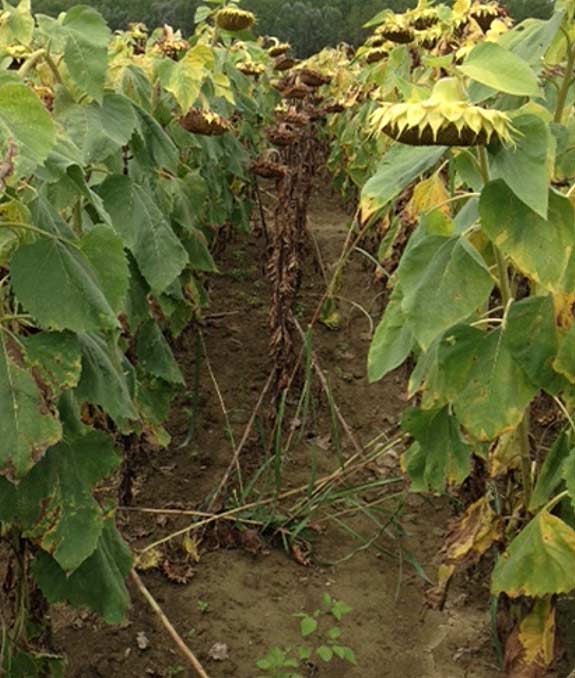 Figure 4. Picture of sunflower tolerant lines vs a genotype susceptible to Phomopsis helianthi in an artificially inoculated field.

Chemical control options are available and should be considered as part of an Integrated Pest Management (IPM) program. Preventative applications are most effective, typically when 6 to 8 leaves have developed. Timely and proper application of fungicides (e.g. triazoles, strobilurines, carboxamides) will limit new infections and prevent epidemics.