Soybean iron deficiency chlorosis (IDC) is a nutrient deficiency with general symptoms of chlorosis (yellowing) of the soybean foliage and stunting of the plant. IDC most frequently develops in high pH soils and soils containing soluble salts, where chemical conditions reduce the availability of iron. This condition can limit soybean yields in the northern and western Corn Belt including western Minnesota, the Dakotas, Nebraska, Iowa and other states.

You can typically spot soybeans affected by IDC by leaves that turn yellow while the veins of the leaves stay green (known as interveinal chlorosis). Iron is an important constituent of enzymes essential for producing chlorophyll. An iron deficiency will limit chlorophyll production, resulting in yellowing of plant tissue. If conditions are severe, the entire leaf may turn yellow and the leaf margins may turn brown, a condition known as necrosis.

Symptoms will not be visible until soybeans begin to develop trifoliate leaves. Cotyledons and unifoliate leaves do not exhibit IDC symptomology. Symptoms may increase or decrease in intensity during the season depending on growing conditions. Iron is not mobile within the plant, so symptoms will appear on the youngest leaves first. Iron chlorosis in a soybean field typically appears in spots, often with no apparent pattern, due to differences in chemical and physical properties of the soil. 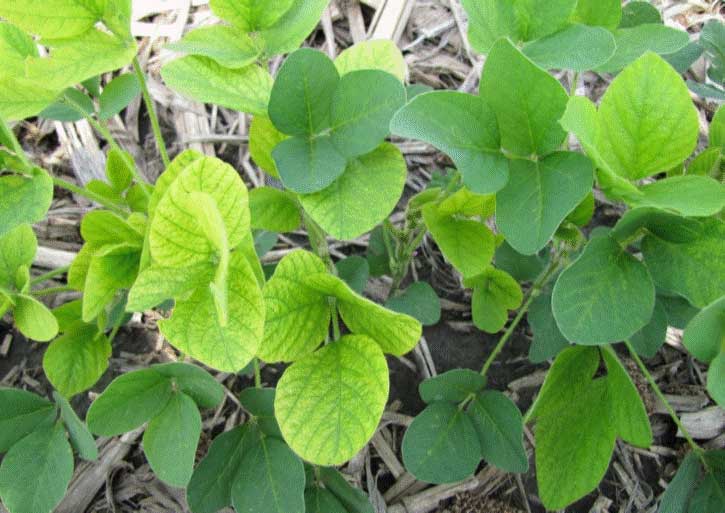 Soils typically have abundant levels of iron, so IDC is not caused by a lack of iron but rather by conditions that limit the availability of iron for plant uptake. The factors that may cause chlorosis are complex and interact with each other to intensify the level of chlorosis. The most dominant factors affecting IDC occurrence are carbonate levels, salts, and depressional field areas with poor drainage. IDC severity can vary from year to year within the same field depending on the environmental conditions of the growing season.

Soybean IDC frequently occurs in calcareous (lime-containing) soils. These soils are often referred to as alkaline soils and have high pH values (>7.5). At high soil pH, iron is less soluble, making it less available for uptake by plant roots.

However, chlorosis of soybeans does not occur on all high-pH soils. The pH of surface soils in areas where IDC symptoms occur and areas where they do not are often the same but there can be differences in both chemical and physical properties of subsoil. The subsoil in a chlorotic soybean area is generally poorly drained, higher in pH, contains soluble salts and excess lime (carbonates), and may have a higher concentration of sodium.

The interaction of weather conditions with soil properties causes differences in IDC severity from year to year and field to field.

Growing seasons with excess rainfall and cool soils typically result in higher incidence of IDC. Soils with high calcium carbonate levels near the soil surface can often have significant symptoms of IDC. Biological activity in the soil converts calcium carbonate into carbon dioxide and bicarbonate (HCO3-). Wet conditions limit air exchange between the soil and the atmosphere, causing bicarbonate ions to accumulate in the water in the topsoil. Bicarbonate interferes with both uptake of iron and mobility of iron within the plant.

Continual rainfall and saturated soils also reduce oxygen in the root zone. Oxygen is need for plant uptake of iron. Soil compaction along with excess rainfall can be contributing factors in the reduction of iron uptake. Cool springs with lower soil temperatures reduce microbial activity within the soil. The reduction of microbial activity leads to less iron uptake and increased severity of IDC.

Higher nitrate levels in the soil are also a contributing factor to IDC, according to field and greenhouse studies by University of Minnesota researchers (Kaiser et al., 2011). Differences in IDC driven by soil nitrate levels are commonly seen when wheel tracks through a chlorotic area of the field remain green (Figure 2). The soil under the wheels is slightly more compacted, creating a lower oxygen environment which increases denitrification. The compacted soils under the wheels are not excessively compacted, just enough to account for differences in nitrate in the soil.

The fact that lower oxygen levels in the soil can both reduce IDC severity due to a reduction in nitrates in the soil and increase IDC severity in saturated soils by limiting iron uptake exemplifies the complexity of factors and interactions that contribute to IDC occurrence. 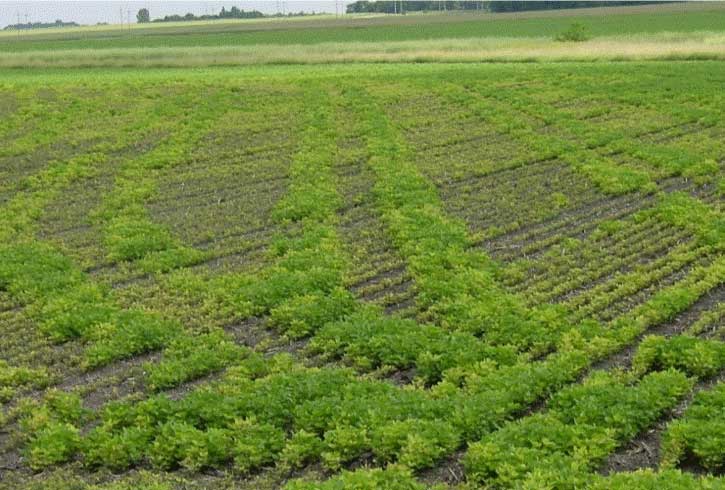 Figure 2. A field with reduced IDC symptoms in areas where soil was compacted by wheel traffic.

How To Assess Soil For IDC Risk

The table below was developed by AGVISE Laboratories, a soil testing firm with labs in Minnesota and North Dakota where IDC is often a perennial issue (Table 1). The index is a tool to help producers differentially target certain fields or parts of fields for IDC management strategies. Soil sample fields for carbonates and soluble salts to help make these decisions.

6 Management Options for Growing Soybeans In Areas With Iron Chlorosis

A survey of soybean producers in areas affected by soybean IDC found that selection of IDC-tolerant soybean varieties was the most common management tactic (employed by 70% or respondents), followed by planting practices (42%), field drainage (33%), tillage (16%), fertility practices (11%), and herbicide selection (6%) (Hansen et al., 2003).

Soybean varieties vary widely in their tolerance to IDC, making variety selection the most important step in managing this problem. Corteva Agriscience has a significant research effort to characterize soybean germplasm for IDC tolerance and select for tolerant varieties. The use of genetic prediction models and multi-year field testing allows for a high degree of confidence in the IDC ratings assigned to Pioneer® brand soybean varieties. Varieties are rated on a 1 to 9 scale where 1 indicates poor tolerance and 9 indicates excellent tolerance. If growers are planting into an area with a history of IDC, they should select varieties with an IDC score of 6, 7 or 8. 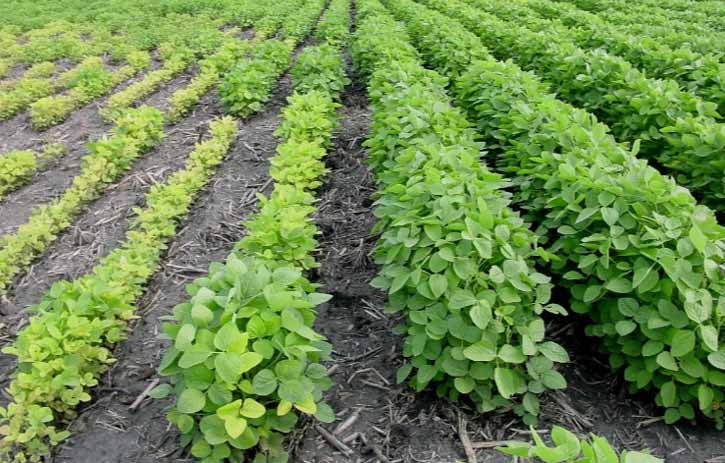 University and Pioneer research studies have shown that higher seeding rates can reduce iron chlorosis symptoms and increase yield in areas of fields with a history of iron chlorosis (Goos and Johnson, 2001; Naeve, 2006). Soybean roots excrete acids as they are growing that increase the availability of iron. Higher plant density increases the amount of this acid in the root zone.

In a Pioneer study in Minnesota in a field with high soluble salt levels, chlorosis effects were more severe when plant density was low (seeding rate < 140,000 seeds/acre). Soybeans yielded from 10-15 bu/acre more at 200,000 vs. 100,000 seeds/acre. Growers should seed soybeans at densities of 200,000 seeds/acre or above for maximum protection against iron chlorosis.

Soils with poor drainage often have higher accumulations of soluble salts and carbonates that reduce the solubility of iron in the soil. Wet soils also lead to lower oxygen levels in the soil and reduced root growth and health. The reduction in root health and the lower solubility of iron in wet soils are major contributors to IDC symptoms. Practices that improve soil structure and water infiltration can reduce issues with IDC. Field tile drainage is also important to consider where applicable to help with soil moisture levels. 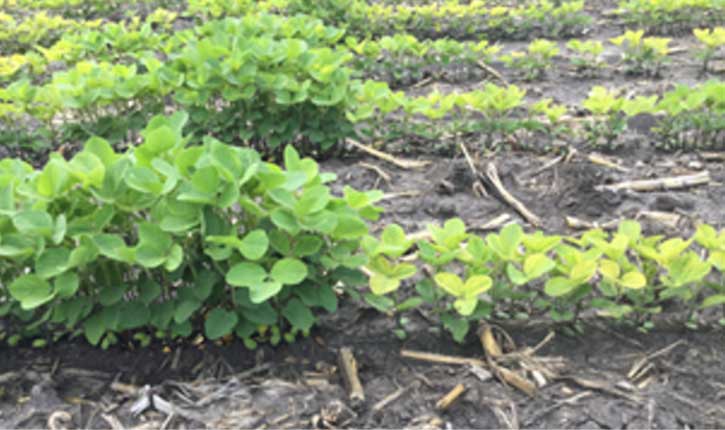 Foliar and soil applied herbicides may increase plant stress which can accentuate symptomology of IDC. Research has shown increased potential for greater yield loss when applying some post-emergence herbicides to soybeans under chlorotic stress. Reduce stress from herbicides by following manufacturer recommendations for weather and application conditions.

5. Use a Companion Crop

In fields with high levels of nitrates, a companion crop of oats may reduce iron chlorosis symptomology. This companion crop needs to be terminated by the time it is 10 to 12 inches tall.

Soygreen® is a commonly used in-furrow iron chelate fertilizer that entered the market in 2006. New formulations have been added since then including a liquid formulation that is less likely to be leached out of the root zone following rainfall.

A Pioneer Agronomy study conducted in 2012 across 11 locations in Nebraska and Kansas with a history of IDC found an average yield response of 2.3 bu/acre with a 3 lbs/acre in-furrow application of Soygreen (Mueller, 2012) (Figure 5). Yield differences were minimal at some locations; however, visual differences were noted, as the varieties treated with an in-furrow application of Soygreen were greener and more robust. A similar study conducted in 2008-2009 found an average yield advantage of 3.9 bu/acre with Soygreen.

Figure 5. Average soybean yield with and without Soygreen® in-furrow treatment across 11 locations with a history of IDC.

Soybean breeders at Corteva Agriscience characterize genetic tolerance of soybean varieties to IDC in multiple ways through the course of the product development pipeline.

Genetic prediction models give soybean breeders the ability to predict the probable IDC tolerance of a soybean line and leverage that information in variety selection prior to any in-field testing. Observations captured from multiple soybean lines over multiple years and locations, coupled with molecular marker and genotypic data, are used to create these models. Soybean lines predicted to have high levels of IDC tolerance can be selected and advanced into field screening trials for further characterization. 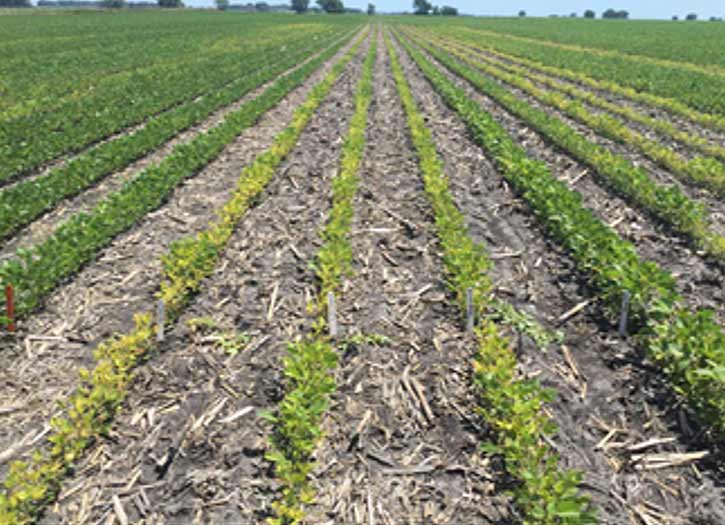 Field assessment of soybean varieties for IDC tolerance is crucial for refining tolerance ratings for soybean lines as well as improving genetic prediction models. IDC tolerance is assessed in field screening nurseries beginning at the R2 pipeline stage, approximately 3 years before commercial release. Characterization continues through R3 and R4 precommercial stages, providing three years of IDC tolerance data across multiple environments for a soybean variety when the decision is made whether to commercialize it. The combination of genetic prediction models with multi-year, multi-location field screening provides a high level of confidence in the IDC trait scores assigned to Pioneer® soybean varieties.

Field trials for tolerance are conducted at managed screening nurseries located from the Red River Valley of Northwest Minnesota through Central Minnesota and North Central Iowa to Eastern Nebraska. Multiple replications of each genotype are planted in fields identified as having uniform characteristics conducive for IDC manifestation and a history of IDC sensitive observations. Each plot is scored on a scale of 1 through 9, with 1 being the most sensitive to IDC and 9 being the most tolerant. Field screening nurseries often include thousands of plots (Figure 7). 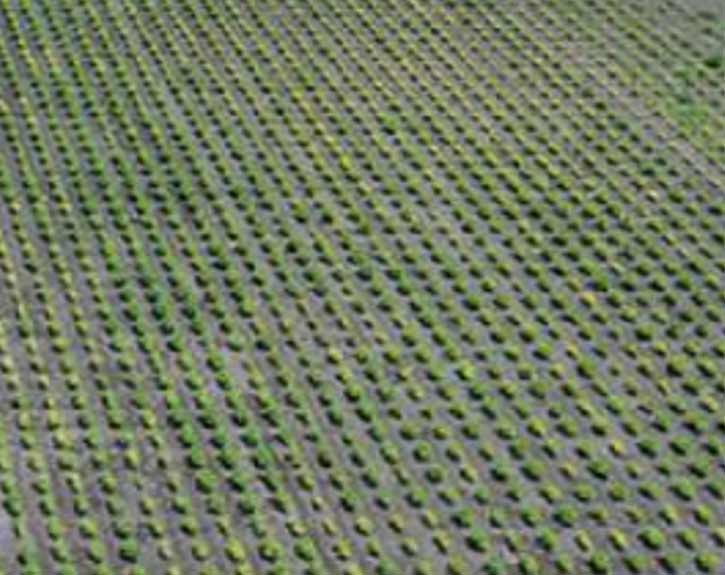 Advancements in Phenotyping and Characterization

Historically, IDC tolerance scores have been determined based on a researcher’s visual assessment of a plot at approximately the V3-V5 growth stage. While this has been a successful approach for characterizing and driving IDC improvement for decades, there are inherent limitations and inefficiencies associated with visual phenotyping. Over the last few years, scientists at Corteva Agriscience have deployed new methods using unmanned aerial systems (UAS) to capture IDC data from screening nurseries. This technological advancement has enabled improvements in the quality and consistency of data captured from field screening nurseries and has greatly increased the efficiency and scale of data collection (Figure 8). 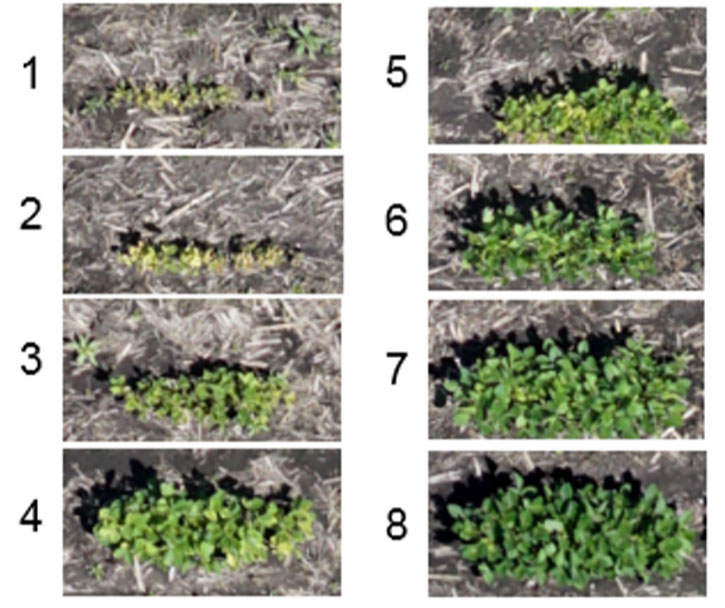 Iron deficiency chlorosis is caused by complex interactions of soil properties and the environment. Understanding the history of fields with iron chlorosis and applying management techniques including variety selection and higher seeding densities, and incorporating the use of in-furrow chelated iron can help reduce the impact from IDC. Corteva Agriscience will continue to lead the way in development and characterization of varieties with greater tolerance to iron chlorosis and other traits.

Get the Power of Pioneer in Every Soybean

When soybean farmers choose to grow with us, they are backed by the power of Pioneer: more data points, a faster research pipeline and industry-leading field teams. Choose from Pioneer® brand soybeans with herbicide-tolerant traits, diverse agronomic characteristics and disease packages.