Crop yield is the most common performance metric used in field crop breeding and research. Yield can be understood as an expression of the genotype and its complex relationships with the environment. When studying this interaction, the notion of yield stability across different environments starts becoming important. The standard yield measure expressed as output per unit area, despite its ease of interpretation, sometimes provides too static of a metric for describing such complex interactions. The current availability of abundant remote sensing and yield data has greatly increased yield measurement and prediction capabilities. Researchers rou-tinely use satellite data to forecast yield on different scales, ranging from sub-field to national level estimates. These tools give us an opportunity to also start incorporating the time dimension into yield analytics.

A study was conducted by Rai A. Schwalbert and Ignacio A. Ciampitti at Kansas State University as part of the Pioneer Crop Management Research Award program to better understand changes in field crop yield over time. Objectives of this study were to: 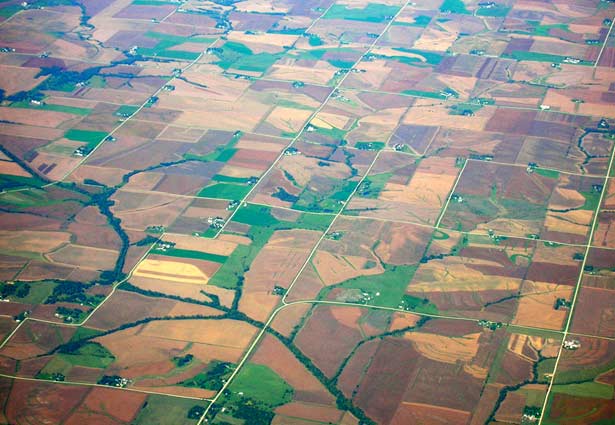 Study Area
The study focused on all areas that were mapped as corn or soybean over the 10-year period from 2008 to 2017 in the contiguous US.

Database
Data sources* used in this analysis are listed below:

Yield Forecast Model
An empirical relationship between USDA-NASS yield and multitemporal enhanced vegetation index was performed individually for each year at county level (EVI was averaged to county level).

Yield Prediction
Since the yield forecast model was trained in a coarse scale (county-level), yield was forecast using a 15-km grid layer rather than the MODIS native resolution (250 m). A 15-km scale avoided losing too much spatial information while the predictions were less affected by the difference of scale between the model training and application (related to 250 m), and it was helpful for further data manipulation, because it avoided problems with missing data in the temporal dimension (pixels were rarely tagged as corn or soybean in all ten out of ten years). All the analyses were performed using different scales (10 km, 15 km, 50km and county-level) to check the impact of the scale on the output.

The year-specific yield forecast models were applied on each one of the 15 km layers, and the predicted yield was normalized as relative yield.

Yield layers were geographically stacked and the average and the coefficient of variation were calculated for each cell over time. Only pixels tagged as crop in at least 4 out of 10 years were used.

Cluster Analyses
Cluster analyses were performed for each crop individually. Dissimilarity matrices with Euclidean distance were built for crop variables (average yield and CV) and for spatial variables (latitude and longitude). For the purposes of this study, the clusters are referred to as yield factor domains.

Within-Cluster Spatial and Temporal Stability
Contribution of persistent and non-persistent factors to yield gaps for corn and soybean were explored within each cluster. Yield gap (Yg) was assumed as the difference between the 95th percentile yield and average yields. For building the yield gap profile, yield gap was estimated for different length of years, denoted by L. The yield maps were averaged using all possible combinations for different length of the record (in # of seasons) and the Yg was estimated for L varying from 1 to 10. The steepness of the curve and the distance between lines provide insights into how persistent spatial yield differences are throughout the study period, and thus how important persistent factors like soil quality or farmer skill are in explaining the overall yield gap. The area between the two lines was calculated to numerically quantify the persistence of yield gap over the time within each cluster. This metric was termed yield memory (Figure 1). 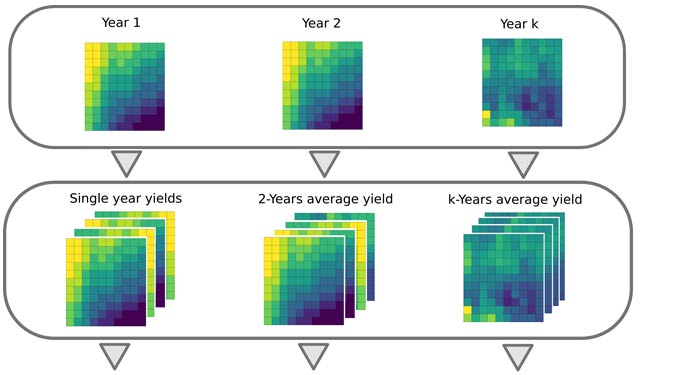 Figure 1. Summary of procedure to compute yield gap profiles and yield memory. Images from multiple years are averaged to create maps of average yields for varying periods of time. The maps are then used to compute the difference between maximum and average yields for the yield factor domains, and this difference is plotted versus the number of years used in the average (solid line). The dashed line portrays the expected change in yield gap with increasing years if yield patterns were entirely random in space. The shaded area between the lines represents the yield memory.

Within each cluster, a random forest algorithm with weather and soil variables as predictors was used to check the importance of each factor in explaining differences in yield. The importance of each weather and soil variable was computed from permuting the out-of-bag data (data that was not used for building the trees). For each tree, the prediction error of the out-of-bag portion of the data was recorded. Then the same was done after permuting each predictor variable. The difference between the two was then averaged over all trees and normalized by the standard deviation of the differences. The framework presented in Figure 2 summarizes the main steps of all analyses performed in this study.

Figure 2. Analysis framework showing steps (1) crop yield forecast and data aggregation to 15 km, (2) data summarization (mean and coefficient and variation), (3) spatial constraint clustering, (4) estimate of the stability of the spatial pattern over years, and (5) evaluation of the influence of weather and soil attributes on the stability of spatial patterns.

The cluster analysis with spatial constraint produced 30 yield factor domains for corn and 21 for soybean. Despite the difference in the total number of clusters between the crops, many of the yield factor domains broke out into roughly similar geographical areas. This can be easily visualized for YFD 24 and 16, for YFD 21 and 14, and for YFD 13 and 7, for corn and soybean respectively (Figure 3).

Two important trends were documented among the yield factor domains for both crops:

Another way to estimate the persistence of the spatial pattern across years is to use one year (ranked year) to split the yields from a region into classes, and then to verify if the classes are consistent over the remaining years. For this study, 2017 was used as the ranked year and the yields from this year were divided into deciles. The same division was performed for the remaining years (Figure 4). The significant overlap between the distributions indicates that the relative ranking of yields across pixels tends to vary from one year to the next; however, the more evident positive trend for low-yielding yield factor domains (YFD 13 for corn and 7 for soybean) indicates a higher level of persistence, with high (low) yielding pixels in one year more likely than average to be high (low) in other years. The absence of positive trend and the higher overlap among the distributions for higher-yielding yield factor domains (YFD 21 for corn and 14 for soybean) indicate a lack of persistence for those clusters.

The soil variables presented a greater contribution to explaining the yield differences in low-yield environments, for both corn and soybean. This makes sense since those environments had a higher yield memory and soil variables tend to have more consistent effects from year to year compared to weather.

Figure 4. Yield gap profiles in yield factor domains 13 (low yield) and 21 (high yield) for corn and 7 (low yield) and 14 (high yield) for soybean. Solid lines represent the decrease in yield gap as the number of years increases for the satellite-estimated yield. Dashed line represents the expected change in yield gap with increasing years if yield patterns were entirely random in space (computed by randomly re-ordering the spatial distribution of yields in each year). The boxplots show the yield distributions for 10 groups pixels, where the groups are defined by the yield deciles in a single year (in this case, the last year of the study period - 2017). The yield distributions are calculated from yields on these fields from nine years prior to the year used to define the groups. Distributions are represented by the median (horizontal line), 25th and 75th percentiles (box), and 10th and 90th percentiles (whiskers).

Yield memory is a promising concept with potential to help researches to quantity the degree of change in yield spatial patterns over time. It has value as a tool helping to screen environments where factors of interest to researchers are the main drivers leading to differences in yield from one growing season to the next.

Furthermore, in the U.S. this study found a significant negative correlation between corn and soybean yields and yield memory, indicating that regions with higher yields, despite of having more homogeneous yields within a specific growing season, have a lower tendency to maintain spatial patterns from year to year. For high yield memory regions, soil variables had greater weight in explaining yield differences compared to the low yield memory cluster.

Research conducted by Rai A. Schwalbert and Ignacio A. Ciampitti, Kansas State University, as a part of the Pioneer Crop Management Research Awards (CMRA) Program. This program provides funds for agronomic and precision farming studies by university and USDA cooperators throughout North America. The awards extend for up to four years and address crop management information needs of Pioneer agronomists, sales professionals, and customers.

The foregoing is provided for informational use only. Contact your Pioneer sales professional for information and suggestions specific to your operation. Product performance is variable and subject to any number of environmental, disease, and pest pressures. Individual results may vary.