The risk of crop injury with some herbicides can vary among corn hybrids. Pioneer scientists conduct research trials to evaluate corn hybrid response to herbicides. The primary objective of this research is to identify hybrids with below-average tolerance to commonly used herbicides. This information is provided to corn producers to help them reduce the chances of herbicide injury. 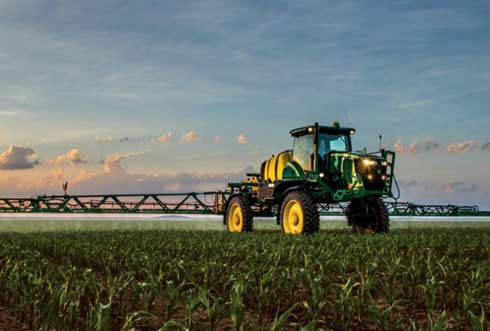 Other seed companies have similar goals, but their testing philosophies differ. Some companies test many herbicide products across a few environments rather than major herbicide families at a relatively large number of locations. This article will discuss the scientific basis, methods and results of Pioneer’s herbicide testing program.

Pioneer, other seed companies, and universities have conducted research studies to evaluate hybrid tolerance to herbicides for a number of years prior to the development of guides to help manage herbicide applications. The published results of university research have been mixed.

Earlier work by Wych and Schoper (1988) evaluated five hybrids and five herbicides, metolachlor (Dual®), cyanazine (Bladex®), EPTC (Eradicane®), dicamba (Banvel®), and bromoxynil (Buctril®) from 1984 to 1987. They found no differences among hybrids in injury ratings for any of the five herbicides, nor were there any significant hybrid by rate interactions. However, there were significant environment by herbicide interactions. This indicates a specific environment was needed for crop injury to occur. However, Lund (1995) reported that hybrids differed in sensitivity to herbicides. His results suggested that in the years that herbicides showed significant early-season crop injury, hybrids with injury were consistently lower yielding when compared to less sensitive hybrids.

University publications also suggest that hybrids differ in their response to herbicides. For example, the 2015 Illinois Agronomy Handbook states that “hybrids and varieties vary also in their tolerance to herbicides and environmental stress factors”. Many herbicide product labels also hint of interactions, suggesting that growers consult their seed representative for hybrid tolerance information.

Pioneer has been conducting research on tolerance of its seed products to herbicides for more than 35 years. The results have generally confirmed that environmental conditions at or following application play a much greater role in crop injury than hybrid or variety selection.

Prior to the development of the Corn Hybrid-Herbicide Management Guide, a study was conducted by Pioneer Agronomy Sciences (1993-1995) in which cyanazine (Bladex®), dicamba (Banvel®), metolachlor (Dual®) and nicosulfuron (Accent®) herbicides were applied to leader hybrids at 0, 1, 2 and 4 times the labeled rate. At labeled rates, the results indicated there were no significant hybrid by herbicide interactions for crop injury score or grain yield. The research also indicated that the primary determinant of crop injury was not poor tolerance of the hybrid, but the environmental conditions the herbicide and hybrid encountered.

Additional research by Pioneer Agronomy Sciences evaluated five hybrids and five herbicides across ten locations (2001-2003). The herbicides evaluated were Bicep® II (metolachlor + atrazine), Harness® Xtra (acetochlor + atrazine), Steadfast® (nicosulfuron + rimsulfuron), Balance® Pro (isoxaflutole), and Clarity® (dicamba). The experiment detected an environment by herbicide by hybrid interaction for crop response and grain yield. This three-way interaction indicates that the environment during or after the herbicide application (or crop emergence) affected different hybrids and herbicides at different locations. When comparing the relative variation due to hybrid, herbicide, and environment to the total experimental variability for grain yield, the variation due to environment was overwhelming (Figure 1). These results are similar to findings from a previous study (Gaspar, 1998).

Even though environment was the primary determining factor for hybrid response in this study, additional Pioneer research on newer herbicides has identified some potential hybrid by herbicide interactions. For this reason, Pioneer has continued its herbicide-testing program over multiple years and environments. 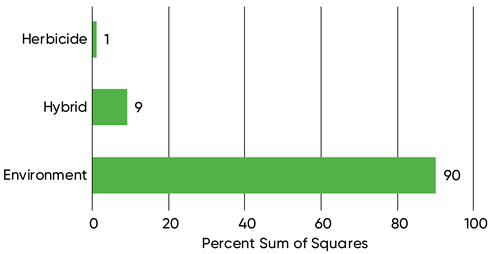 Since a specific environment is usually needed to produce a crop response, multiple environments must be evaluated to increase the chances of detecting herbicide sensitivity. To determine the number of locations needed, Pioneer Agronomy Sciences applied power analysis to data previously collected from herbicide by hybrid trials (Table 2).

Table 2. Number of locations* required to determine if hybrids show a differential response in grain yield to labeled rates of corn herbicides (2001 to 2003 research data). 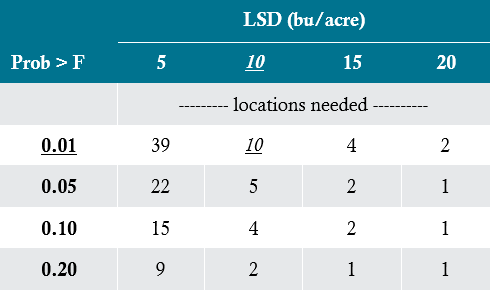 The results of the power analysis indicated that 10 locations with three replications per location are needed to find significant treatment effects of greater than 10 bu/acre at a Prob > F value of 0.01. A value of 0.01 indicates that if the same study were repeated, results would be different only 1% of the time. 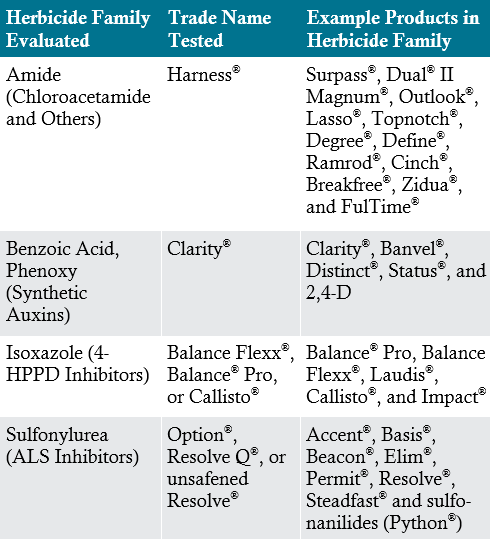 Four ratings are used in the management guide for corn. Ratings are based on replicated research trials, chemical company recommendations and field observations.

An adequate tolerance rating indicates that the hybrid has acceptable tolerance to the herbicide. Thus, under normal growing conditions, research and field observations suggest injury is unlikely to occur when label recommendations are followed.

This rating indicates that these hybrids may warrant careful management to avoid herbicide injury under challenging environments such as sandy soils, low organic matter soils, high pH soils, cool wet conditions, or hot and humid conditions. University research indicates products within a herbicide class may vary in their degree of crop selectivity (Owen and Hartzler, 2015). The potential for seed product-herbicide interaction may also be impacted by the labeled herbicide rate used and the method or timing of application. The additional care needed to avoid damage will depend on the specific herbicide family.

In field observations and research studies, crop injury has occurred with this herbicide/hybrid combination.

Additional testing is needed to evaluate the herbicide/hybrid combination.

Amides (chloroacetamide and others)

Injury from amide herbicides is more prevalent on sandy soils with low organic matter. Additional conditions that may increase the potential for injury are deep planting, cool, wet conditions and/or soil crusting. Management options to consider with hybrids with less tolerance to chloroacetamides are listed below:

The potential for crop injury from benzoic acid or phenoxy herbicides increases when the hybrid is under stress and/or the hybrid is sprayed at a late stage of growth. The additional management suggestions below are helpful in reducing potential for injury:

Crop injury from pre-plant or pre-emergence applications of HPPD inhibitor herbicides is more probable on sandy soils with low organic matter. Cool, wet growing conditions may also increase the potential for damage. Injury from post-emergence applications of HPPD products is more likely if the corn is sprayed when plants are exposed to a stress, such as cool, dry conditions. Suggestions that may reduce the likelihood of injury include:

The purpose of this guide is to assist growers in selecting and managing their herbicide programs. However, under certain environmental conditions, a herbicide may become more active and/or crop tolerance may be reduced. In these cases, crop injury may occur on hybrids that have acceptable tolerance to the applied herbicide. The environmental conditions are the key factor in hybrid or variety by herbicide interactions observed in the field.

Predicting the environmental conditions a producer will encounter in a given year is nearly impossible. Because of this uncertainty, producers must select appropriate strategies to reduce the chances of herbicide injury and maximize yield. First, growers should select the highest yielding set of products for their fields. Secondly, select the least stressful herbicide for the weed pressure present on a given field. Finally, apply the herbicide at the recommended rate and time to minimize possible crop injury and optimize weed control. For more information, please contact your Pioneer sales professional or herbicide representative.