Verticillium wilt is caused by the fungus Verticillium dahliae Klebahn. It is a soil-borne pathogen with a broad host range which causes premature death and wilt in sunflower. It has been described that V. dahliae can infect more than 400 plant species including herbaceous annuals and perennials, and woody perennials (Klosterman et al, 2009). Currently, Verticillium wilt is a major disease of sunflower in Argentina, Canada and the USA and has secondary importance in Spain, France, Romania, Bulgaria, Ukraine and Turkey (García-Carneros et al, 2014). However, the incidence on the countries surrounding the Black Sea is increasing in the last years and in some areas of France it has become a major constraint for the crop.

Verticillium affects the crop performance by reducing the plant height, test weight and oil content (Figure 1). If the attack starts before flowering, yield reduction is significant and many plants can die. The absence of effective chemical control and resistant hybrids of comparable yield potential had made the accurate evaluation of yield losses produced by this disease difficult.

Figure 1 shows a typical infection by V. dahliae in the field (Fig. 1A) and the biological consequences of the infection by the fungus in a susceptible hybrid vs the same hybrid not inoculated.

Figure 1. Field with severe infection by Verticillium dahliae (A) and comparison of a susceptible hybrid artificially inoculated vs not inoculated in control conditions (B).

The disease is characterized by a leaf wilt occasioned by the plugging of the conduction tissues starting from the root. It is thought that the fungus produces toxins which are translocated throughout the plant causing the chlorotic and necrotic areas between the veins.

Verticillium wilt symptoms can be present on individual plants or groups of plants in a field. Initially, the symptoms appear on older plants, generally after the six-leaf stage. A mottling of the lower leaves becomes apparent (Figure 2A) and disease symptoms progress up the plant as plants near maturity (Figure 2B). Tissue between leaf veins become yellow then brown, giving infected leaves a mottled appearance.

Infected leaves eventually wilt, become completely dry, and die (Figure 2C). This situation results in a reduction of photosynthetic foliar surface and decline of photoasimilate availability. A blackening of the stems is often observed (Figure 2D), especially near the soil line. Infected plants are stunted and mature early or die before flowering. The vascular system of infected stems is brown to black when cut in cross section (Figure 2E) (Sadras et al, 2000; Creus et al, 2007).

Figure 2. Detailed symptoms of Verticillium wilt: Initial symptoms in the lower part of the plant (A); typical symptomatology of a plant infected by Verticillium dahliae before maturation (B); dry plant by the infection of the pathogen (C); blackening of the stems in dry plants (D); colonization of the vascular system by the fungus (E); and piece of stalk cut longitudinally showing the microesclerotia (F).

Infection occurs when soil borne microsclerotia germinate and penetrate sunflower roots. Germination is stimulated by root exudates of the host plants. The fungus penetrates the root of a susceptible plant in the region of elongation and the cortex is colonized. From the cortex, the hyphae invade the xylem vessels where conidia are formed. Vascular colonization occurs as conidia are drawn up into the plant along with water. Due to fungal material and host reaction products, the vascular system becomes plugged, preventing water from reaching the upper parts of the plant even in the presence of abundant soil moisture. Leaves and stems deprived of water soon begin to exhibit symptoms of wilting and foliar chlorosis.

As the infected plant senesces, the fungus produces microsclerotia (Figure 2F) which are released into the soil with the decomposition of plant material. Tillage then results in the further incorporation of the microsclerotia into the soil. The fungus survives for many years in this dormant form (Sadras et al., 2000). Figure 3 presents the life cycle of V. dahliae.

The pathogen can be disseminated in and amongst fields in surface irrigation water, by the movement of infested soil and also with the seeds. The Verticillium wilt pathogens survive between sunflower crops in the soil as dormant microsclerotia which can survive in the soil for 10-15 years. The pathogen has a large host range consisting of more than 350 plant species, (Creus et al., 2007; Klosterman et al, 2009; Sadras et al, 2000). Verticillium wilt is favored by moist soils and a temperature range of 20-25°C. Seed transmission of V. dahliae has been documented and this fact can have a role in the epidemiology of the disease by facilitating the spread of the pathogen to new production areas (Klosterman et al, 2009). 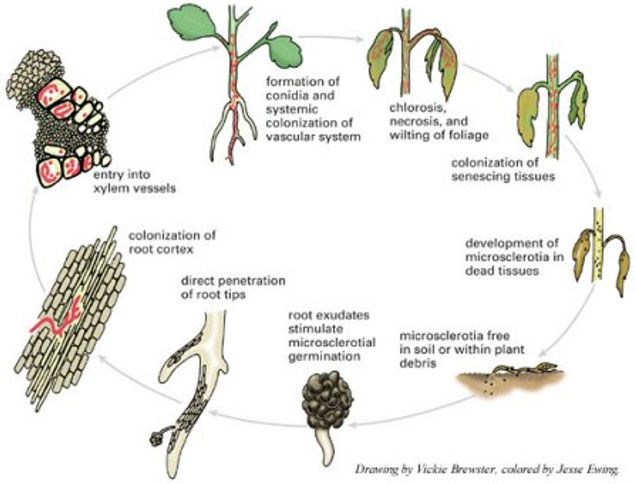 Verticillium wilt management is based mainly on the use of tolerant cultivars (Figure 4). Because of the presence of different races of the pathogen (García-Ruiz et al, 2014), it is possible that hybrids with good tolerance for one area do not behave in the same way in another region.

Pioneer is studying the race structure of V. dahliae in the most problematic regions to develop hybrids with adequate tolerance profiles in each region. Crop rotations can be effective but long crop rotation (greater than 5 years) with no host crops are needed which cannot always be implemented.

Figure 4. Resistant and susceptible hybrids in field conditions under a natural infection by Verticillium dahliae (A), and in controlled conditions followed by artificial inoculation (B)