High-producing corn hybrids are well-adapted to efficiently extract nutrients from soil and incorporate these nutrients into biochemical processes for grain production (Figure 1). One of your jobs as a corn producer is to help create and support environmental conditions that maximize plant growth and grain production. There are two primary requirements for success. First, the fertility program must create a soil environment that contains adequate amounts and the proper balance of the different plant nutrients. Second, these nutrients must move into and throughout the corn plant to create grain. 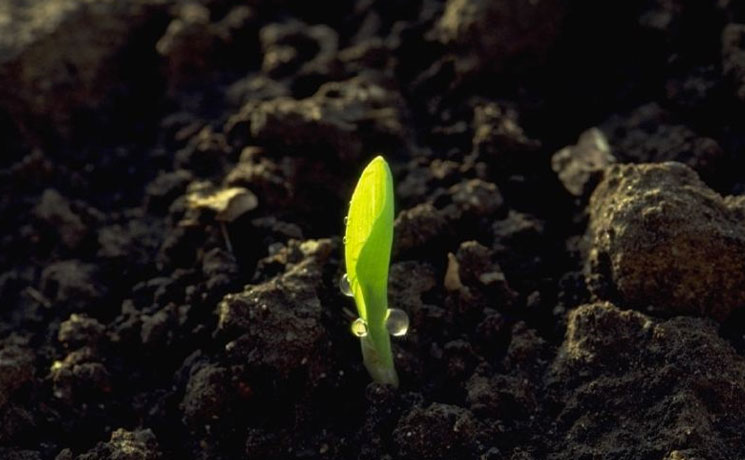 These six properties support life in all organisms. However, for this article, we shall focus on only the first three. 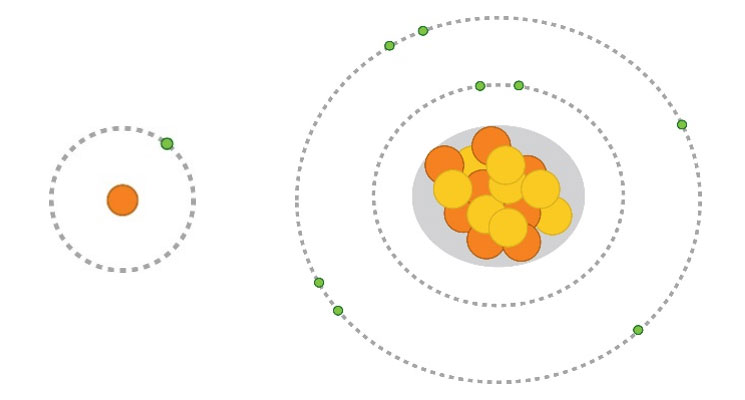 Figure 2. Diagram of a hydrogen atom with one electron encircling one proton on the left, and an oxygen atom with eight electrons encircling a nucleus consisting of eight protons and eight neutrons on the right. 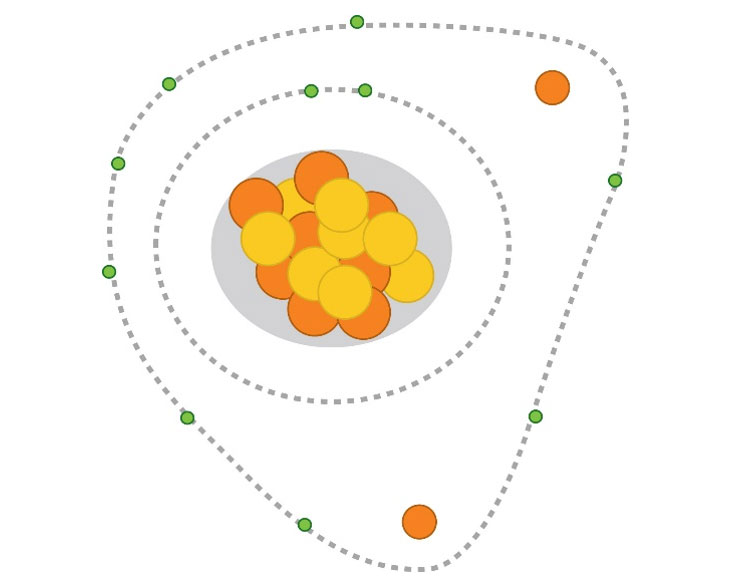 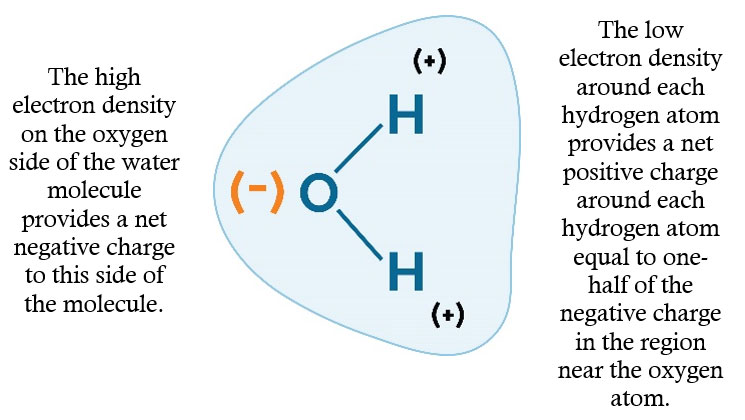 Figure 4. The water molecule exists as a dipole – a molecule containing regions of partial negative and partial positive charges.

Water is an Excellent Solvent For Plant Nutrients 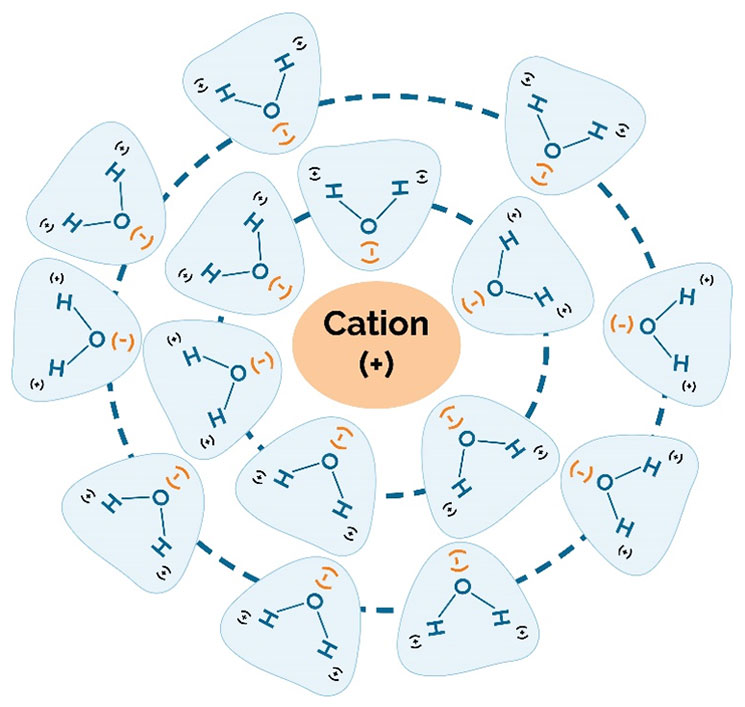 Figure 5. To dissolve cations, negative portions of water molecules face toward the cation to disperse the positive charge (opposites attract).

For negatively charged nutrients such as nitrate (NO3-) and phosphate (H2PO4-), the negative charge is dispersed through the partially positive charged portions (hydrogen-side) of water molecules (Figure 6). 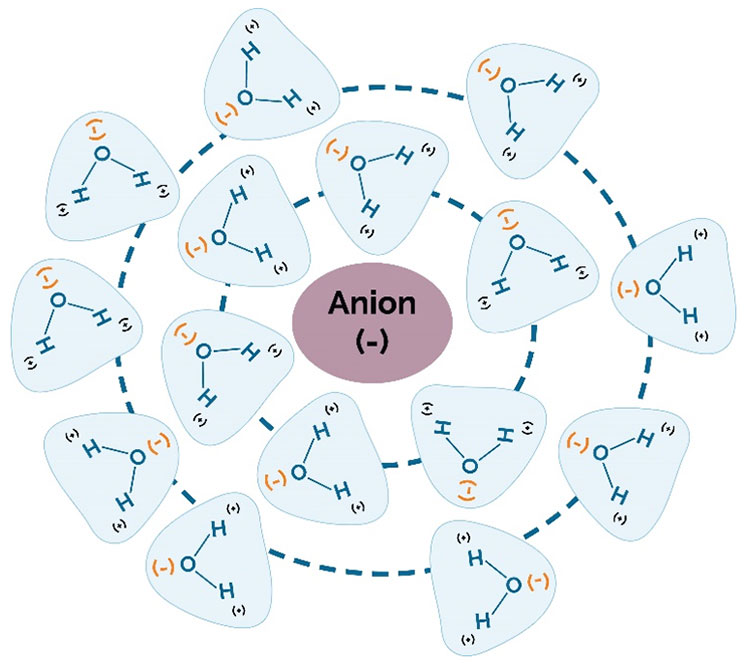 Figure 6. To dissolve anions, positive portions of water molecules face toward the anion to disperse the negative charge (opposites attract).

Forces of attraction between nutrient ions and soil and water molecules determine nutrient behavior and mobility in soil (Table 1). Cations such as K+ tend to bond to negatively charged soil particles, are not abundant in the soil water phase, and tend to have low mobility. Anions such as NO3- do not readily bond to soil, are more abundant in the soil water phase, and are more mobile in soil water. Phosphorus is an exception, as it exists as an anion but has low water solubility, making it relatively immobile in soil.

Water Has a Strong Force Of Cohesion

Magnets have a single pole at each end, so magnets can form only a line. Water molecules have two positive poles and one negative pole. This additional positive pole allows water molecules to link together to form a complex 3-dimensional network (Figure 7). 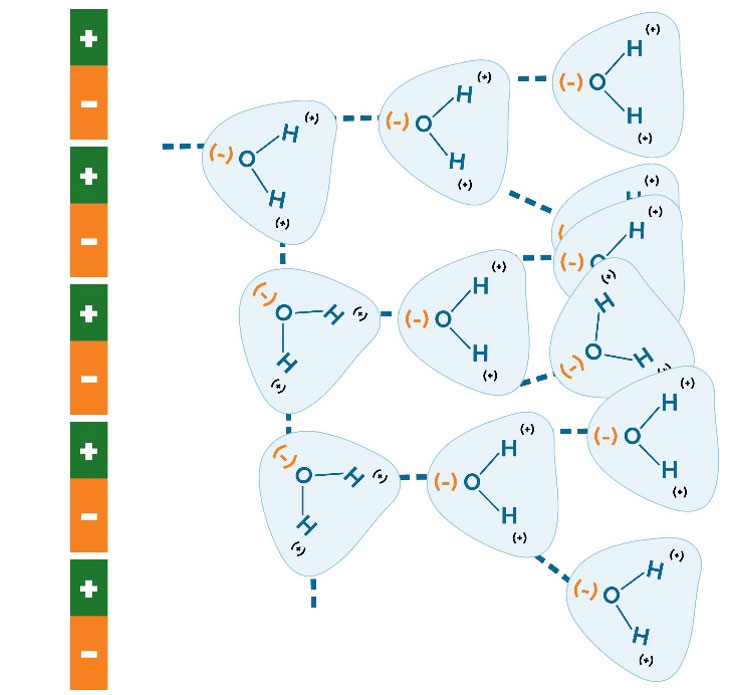 You, as a farmer, move corn grain by pulling the grain cart with a tractor. What force does the corn plant use to pull water with dissolved nutrients into and throughout the corn plant?

Forces Governing the Movement of Water in Soil And Plants

Water movement in soil and plants is not a random process. Five primary forces act on individual water molecules. These forces, in rank order from most to least powerful, are:

Sunlight provides the ultimate power for the force of evaporation, the most powerful force water molecules must obey as water moves from soil and throughout the corn plant (Figure 8). 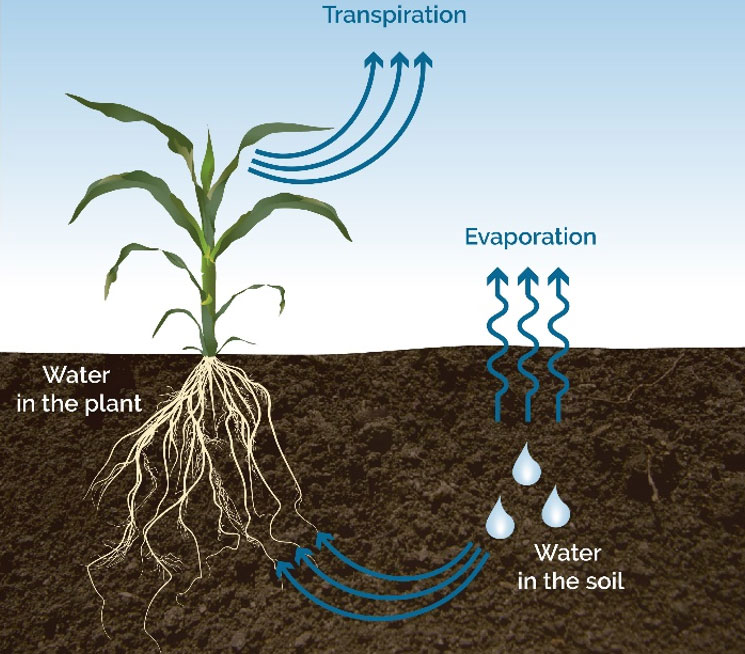 The second most powerful force for pulling water through the corn plant is the hydration of molecules and cellular constituents in growing points of the plant such as the developing kernels in the ear. This hydration process is dependent on the ability of water molecules to adhere to other molecules (the force of adhesion). Ionic attraction of charged ions such as potassium and the force of hydrogen bonding to organic molecules such as sugar and proteins create this force of hydration. The force of evaporation pulls water up through the vascular tissue. The pulling force created by hydration of organic materials in the developing kernels is sufficient to pull water from the vascular tissue to the ear. If the corn plant is not under heat stress and there is plenty of water in the soil, the developing kernels can siphon water from the vascular tissue to provide the water and nutrients needed to support maximum growth and yield. However, if the amount of water that can be extracted from the soil is low and the corn plant is facing a “heat stress” environment, the force of evaporation dominates. The corn plant shuttles water to support evaporative demand and less water is shuttled to support kernel and ear growth. The result of this water and nutrient deficit to the ear is reduced yield.

Corn requires a minimum of approximately 25 inches of water during the growing season to achieve maximum grain yield. At a population of 32,000 plants/acre, approximately 21.2 gallons of water either transpire through the corn plant or are associated with biochemical and physical processes of that corn plant from planting until physiological maturity (black layer). Water carries nutrients from the soil into and throughout the corn plant and eventually deposits needed nutrients in the harvested ear. Water uptake and plant nutrient uptake are tightly related – limited water uptake reduces total nutrient uptake. 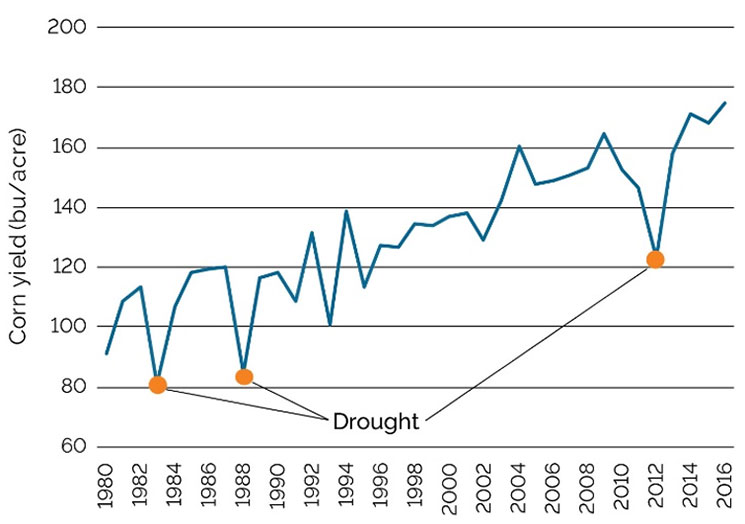 In soils with adequate fertility, the ability of the hybrid to use water efficiently is a big factor in determining the hybrid’s yield potential across a range of environments. “Rain makes grain.” When examining long-term U.S. corn yield trends, years in which there was widespread drought immediately stand out (Figure 9).

Improved drought tolerance in corn has been one of the primary objectives of plant breeders at Pioneer over the past 60 years. Pioneer established the first dedicated drought breeding station in York, Nebraska, in 1957. Since then, Pioneer has expanded drought research around the globe. The progress that has been made in improving water-use efficiency in corn is evident in yield trends relative to growing season precipitation in rain-fed corn production. For example, in Champaign County, Illinois, where all, or nearly all, corn is produced without irrigation, corn yield per inch of rainfall during the period of April through September has increased from around 4 bushels in the 1950s to around 7 bushels in 2016 (Figure 10).

Currently, Pioneer conducts field research on hybrid drought tolerance at multiple managed stress environments in North and South America, Europe, India, South Africa, and other locations around the globe with dependable levels of drought stress. Pioneer® brand Optimum® AQUAmax® hybrids, which are developed and tested to help deliver a yield advantage in water-limited environments, represent the most recent output of this ongoing research effort.

All water molecules within the soil, plant, and atmosphere strive to maintain a dynamic equilibrium in the midst of constantly changing environmental factors. Water is pulled from the soil, through the corn plant, and into the atmosphere. As this water is pulled, it carries the necessary nutrients to support plant growth. Water uptake and plant nutrient uptake are tightly related – limited water uptake reduces total nutrient uptake. In high fertility soils, the ability of the hybrid to use water efficiently is a big factor in determining the hybrid’s yield potential across a range of environments. As corn breeders develop new hybrids that require less water to achieve maximum yield potential, agronomists, fertilizer dealers, and farmers will need to develop agronomic practices for the corn plant to transport water and nutrients more efficiently in order to achieve higher grain yields for these new genetics across a range of environments.

Get More Out of Every Drop

Struggling with water-limited conditions? Choose corn products that were developed to get more out of every drop of water and deliver a yield advantage, rain or shine.