A field of healthy soybeans requires managing pests. For soybean cyst nematodes relying on in-plant genetics that beat back the pest is a valuable tool, but success requires management.

In any crop year there's a battle going on. Pests in the field are working hard to dine on your crops, whether weeds that steal key nutrients or insects and other animal pests that are chewing their way through profits. For soybeans, a key challenge is the soybean cyst nematode, and a key tool to defeat this pest is losing its strength.

That tool? Genetic resistance built into most soybean varieties from a source known as PI 88788. But many years of planting varieties with their sole source of resistance derived from PI 88788 has created a new problem. "The soybean cyst nematode is a sexually reproducing nematode, so there is a lot of genetic variation within these nematode populations," says Melissa Mitchum, professor, plant nematology, University of Georgia. "We've basically seen natural selection take place underground resulting in resistant nematodes."

Mitchum works with the SCN Coalition, a diverse group of university researchers, Extension specialists and ag company representatives concerned about the evolving threat from the pest.

The science of resistance in agriculture is a fascinating field. Spend a little time talking to Mitchum, and you hear about the work being done to better understand how this crop pest is becoming resistant. That work is below-ground research aimed at eventually helping farmers preserve yields.

SCN can be a silent yield robber, infesting crop roots and trimming output many times without showing aboveground symptoms. "I think so many of our growers expect to see patches of sick plants, and that's not necessarily the case," says Tamra Jackson-Ziems, plant pathologist, University of Nebraska. "Even the most healthy-looking fields can experience up to 30% yield loss with no other symptoms at all. I think people are lulled into a little bit of, I don't know, dream thinking that everything is fine, and then at the end of the season they experience a yield that doesn't meet their expectations."

Even the most healthy-looking fields can experience up to 30% yield loss with no other symptoms at all.

The rise of resistant SCN in an individual farm field can build over time as farmers plant resistant varieties and rely on the resistance genes from PI 88788 to do the job. "I describe it as a slow-moving rain approaching a cliff," says Greg Tylka, director, Iowa Soybean Research Center, Iowa State University. He notes that it seems that seed companies are really focused on herbicide tolerance to help farmers combat weeds, and most are relying on PI 88788 to carry the load for controlling SCN.

Resistance genes from PI 88788 are the cornerstone of genetic resistance to SCN, and widely available to the industry. PI 88788 was first identified to have resistance to SCN in 1962. Mitchum explains that this multi-gene trait has a single locus, which for breeders means this is a single-gene trait, with only one marker needed, and was relatively simple to move into production. The first soybean variety containing PI 88788 resistance launched in 1978 eventually taking over the market. There was another resistant source discovered in 1957 called Peking (PI 548402), which saved producers millions of dollars in the 1970s and 1980s, especially in the Southeast, but relies on a three-gene model. 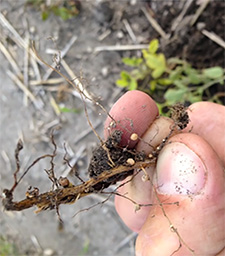 Tylka notes that most variety development programs lean on PI 88788, but seed companies are exploring Peking. Before the advent of molecular breeding, which allows breeders to select the resistance genes and enrich them in their best germplasm, it was a step backward to breed with Peking varieties. But with today’s breeding strategies, genetic information and molecular markers, progress is ramping up to bring new genes for resistance to combat SCN to the customer.

For breeders, the challenge now is that genetic resistance is an either-or choice. Stacking PI 88788 with Peking isn't possible, so it is a germplasm switch. Mitchum adds that there is work underway to identify viable gene stacks that do have some added benefit. For example, PI 88788 combined with genes from Glycine soja, a wild soybean. As for Peking, farmers are going to find more soybeans on the market carrying that trait.

There are also other SCN resistance traits being developed by University (public) breeders using other sources, and there's another – PI 89772 – that's being commercialized and may hold promise.

"We have quite a bit of work going on right now," says Mitchum. "Checkoff dollars are going towards research to try to figure this issue out, and we have a number of programs looking at various rotations and how these might be effective. With the North Central Soybean Research Program we have a multi-state effort among breeders, geneticists, nematologists, and bioinformaticists working together to try to figure out what combination of genes will work best and how we can deploy them in a rotation."

As the 2021 season progresses, taking soil samples to better understand the nematode population you're dealing with can help with next season's planning. But soil sampling for nematodes can be challenging.

"Nematodes are randomly aggregated in the field," says Jackson-Ziems. "You have these little patches scattered all around."

Tylka advises that if you plan to sample for the presence of nematodes, a more concentrated approach is needed. "You need to use a soil probe, not a spade, and collect 20 cores in the same area, flagging the area or marking it with GPS," he says.

He explains that more traditional sampling might involve 20 cores from 20 acres and the farmer may find zero eggs or a low number. "Then they get clobbered and they wonder what's going on," he notes. It's because SCN is notoriously patchy in the field.

Raising continuous soybeans isn't usually a common practice, but where you put soybeans can help keep SCN damage lower. Tylka explains that the corn-soybean rotation has been a valuable tool, since SCN numbers fall during those corn years.

"That's an area where hard research is lacking," he notes. "But by the third year with corn, the soybean nematode population is reduced, but it's not going to decrease much more." He adds that what may be left in the soil would be nematode eggs that are dormant and can live for up to 10 years.

Yet planting a resistant soybean variety after corn can help preserve yields.

The same can occur if the variety contains SCN resistance, but it's being overcome by the nematode population in the field.

One reason, as Mitchum explains, is that nematodes can produce multiple generations in a single season. That can accelerate spread of an SCN population that can beat the soybean plant's genetic resistance, but it also means that if you open the door to SCN production, populations can explode.

This is a tactic that many may miss in the SCN management playbook. Controlling host plants can help keep nematode populations lower, explains Jackson-Ziems.

"Common winter annual weeds, such as henbit and purple deadnettle, you know the really pretty purple blanket of flowers you see out there? They're really strong hosts for the nematode," she says. "There's even the potential that you could give them an extra generation by not managing that weed."

If you have an issue with those fall weeds, a control program can help.

4. Role of the seed treatment

The rise of nematode-focused seed treatments has helped add bushels to the acre for soybeans but Tylka notes the best deployment is to team that treatment with a resistant variety.

"I look at seed treatments as a way to bolster performance of resistant varieties," Tylka says. "I would never recommend them on susceptible soybean varieties or a resistant variety that's not performing very well. They're an added tool in the toolbox."

5. Mix up that mode of action

Farmers have learned that understanding mode of action can be a powerful way to maximize weed control. The same is now true for soybeans. Learning more about the genetic resistance in the soybeans you're planting offers some opportunities.

Jackson-Ziems notes that a vigorous soybean variety with PI 88788 can still perform well with a resistant SCN population. Add in that crop rotation and you can help preserve yield. But as more resistance choices come from soybean seed companies, bringing in new options makes sense too.

However, just like with herbicides, leaning on a single tool too long can be trouble. As you watch the 2021 crop progress, and better understand the SCN populations on your farm, consider your soybean resistance choices. And knowing that number matters.

"Labeling on seed isn't consistent across the industry, so you have to ask your seed supplier," Mitchum says.

Leaning on a single tool too long can be trouble. As you watch the 2021 crop progress, and better understand the SCN populations on your farm, consider your soybean resistance choices.

But knowing the source of resistance matters, especially as new types of genetic resistance (modes of action) become available to growers. Talk with your seed supplier, and if they offer other choices beyond PI 88788, consider adding them to the mix. SCN is a virulent pest ramping up its game to dine on your soybeans. A little management attention can deprive this pest of its dinner.

This article developed by Farm Progress exclusively for Corteva Agriscience.

Discover a yield advantage with ILEVO® fungicide seed treatment. Years of research show that it delivers exceptional activity on acres at risk of sudden death syndrome or soybean cyst nematode.

Get the power to resist soybean cyst nematode with 25 Pioneer® brand soybean varieties featuring the Peking source of resistance and bred to promote yield potential.

ILEVO® is a registered trademark of BASF.