Soybean gall midge is a relatively new insect pest of soybean. Gall midge was first observed in soybeans in Nebraska in 2011. Initially, it appeared to be a relatively minor pest of soybeans, mostly confined to field margins and feeding on soybean plants that were already damaged or diseased. However, instances of greater infestation levels and damage to soybeans were observed beginning in 2018, with populations extending further into field interiors and feeding on otherwise healthy plants.

Very little was known up to this point about the biology of soybean gall midge, including exactly what species is was. Initial investigations identified gall midge observed in soybeans as belonging to the genus Resseliella, which included 15 species known to exist in the U.S., none of which were known to infest soybeans. Genetic and morphological analyses subsequently confirmed soybean gall midge to be a previously undescribed Resseliella species, now named Resseliella maxima (Gagne et al., 2019). 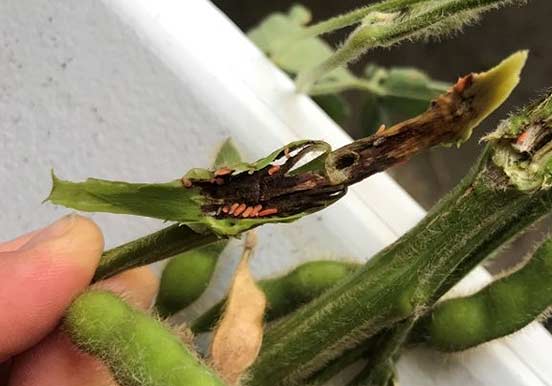 Soybean gall midge has now been confirmed in five states and has proven capable of causing significant crop damage and reductions in yield. There is still much to be learned about the biology and lifecycle of this pest, as well as effective management practices. The situation was further complicated in 2019 with the discovery of a second gall midge species affecting soybeans in parts of Minnesota.

Gall midge damage in soybeans was first reported in Nebraska in 2011 in isolated cases mostly associated with damaged or diseased stems. Sporadic infestations were observed in subsequent years, but damage generally was not severe enough to impact yield. While remaining a relatively minor concern for soybean production, gall midge populations began to spread, with feeding in soybeans first reported in South Dakota in 2015 and western Iowa in 2016.

Pioneer agronomists and scientists at the University of Nebraska, Iowa State University, and South Dakota State University all noted increased infestation in 2018, with infestations occurring earlier in the season and causing higher levels of damage to soybeans. Numerous infestations were observed in 2018 by Pioneer agronomists on otherwise healthy soybean plants, indicating that damaged or diseased tissue is not a necessary prerequisite for gall midge infestation. Economic levels of damage were observed again in 2019. The spread of soybean gall midge has continued, with populations reported in Minnesota in 2018 and Missouri in 2019 and expansion of affected areas in Nebraska, Iowa, and South Dakota (Figure 2). 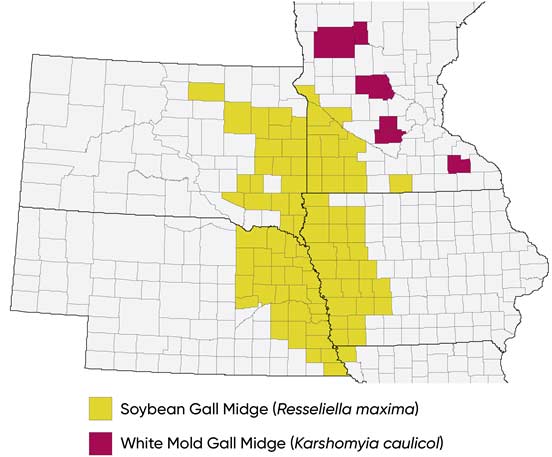 Larvae are very small and start out white, turning bright red or orange as they mature (Figure 3). Adult midges are small (2-3 mm in length) and have long antennae and hairy wings (Figure 4). Gall midge injury in soybean is a result of larval feeding, which occurs near the base of the plant. Multiple larvae can infest a plant. Larvae feed inside the stem, causing swelling and abnormal growth (galls). Infested portions of the stem will appear swollen and brown (Figure 5 and Figure 6). Discolorations of the stem often begin near the soil surface and can extend up to the unifoliate node. Prolonged feeding can cause the stem to break off, resulting in plant death. 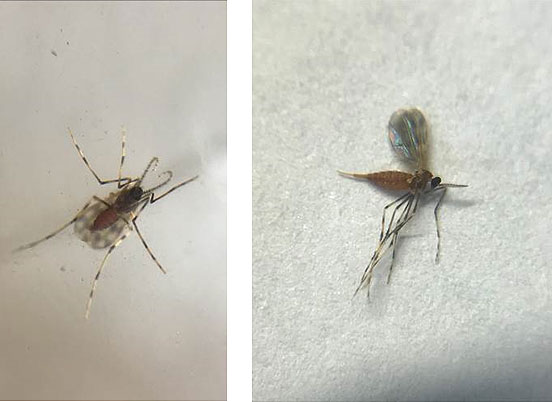 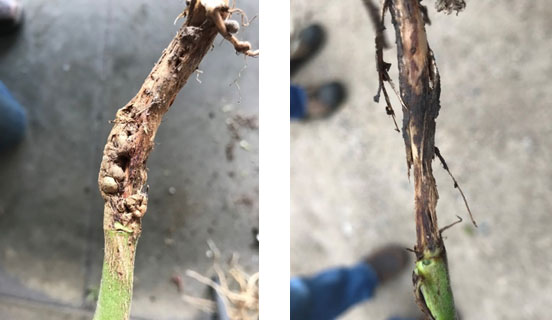 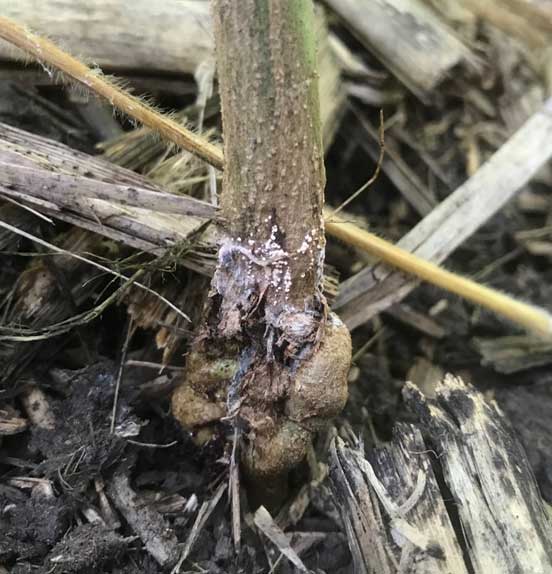 Infestation can occur during vegetative and reproductive stages. Injury is generally most severe at field edges (Figure 7 and Figure 8). Injury on field margins suggests fly movement from previous crop residue to new crop. Injury has also been observed next to CRP and pastures, tree-lines, and groves. In severe cases, infestation can extend into the interior of the field. 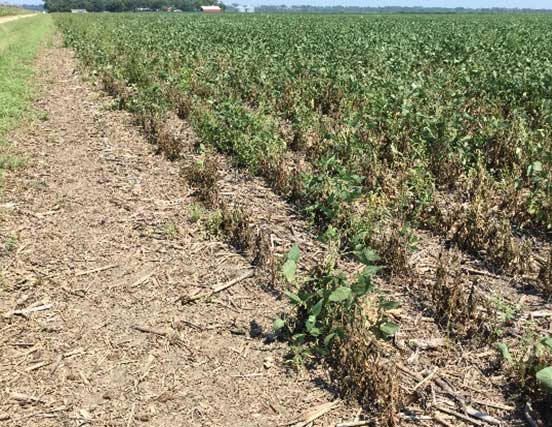 Depending on the severity of gall midge infestation, some soybean plants may wilt, die, or simply show signs of poor pod development and small seed size, especially in the upper 1/3 of the canopy on “healthy-appearing” green plants. Yield loss reports have ranged from a 1-2 bu/acre to nearly total yield loss depending on how early injury occurs and the severity of the infestation in certain areas of a field. 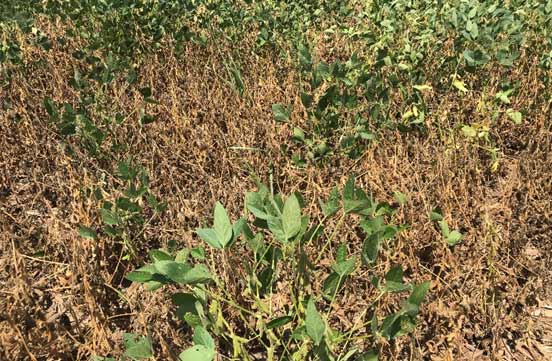 Figure 8. Dead soybean plants due to gall midge injury near the edge of a soybean field. Approximately 95% of plants in this area were dead. Iowa, August 3, 2018; Photo: Jessie Alt, Corteva Agriscience Research Scientist. Timing of adult emergence from the soil varies by geography with first adult emergence observed in mid-June in Nebraska and early July in Minnesota (Knodel, 2019). Adults have a long emergence window – overwintering generation adult emergence extended over a 17-day period in a Corteva Agriscience study in 2019 (Figure 10). Larval infestation of soybean plants was not observed prior of the V3 growth stage in 2019 studies. The current hypothesis is that at this stage of soybean growth, the stem diameter expands creating small fissures allowing the overwintering generation adults to deposit eggs into the stem. Prior to V3, the soybean stems do not have these fissures. Based on observations so far, soybean gall midge appears to go through two or three overlapping generations per year. Management recommendations for soybean gall midge are still in the process of being developed. Preliminary investigations into foliar insecticide treatments have shown some promise for suppressing gall midge populations when applied at the time of pre- or early post-emergence herbicide applications to control egg-laying adults. However, these types of insecticide applications still need more thorough evaluation, and careful consideration is needed to avoid insect resistance issues with midge or other insects, and potential harm to beneficial insects.

The long emergence window of soybean gall midge adults poses a significant challenge for timing and effectiveness of insecticide application. Foliar treatments later in the season when larval feeding in the stems is already underway are not likely to be effective, since the larvae are protected from exposure to the insecticide. More insecticide treatment timings, active ingredients, and rates need to be fully evaluated to determine what options are effective.

Cultural practices do not appear to have an effect on the extent or severity of infestation. Research on differences in soybean variety susceptibility to gall midge damage and insecticide seed treatment effects on gall midge is ongoing. Scouting recommendations for adult flies have not yet been developed. Scouting for adults will be challenging due to the small size of adult midges.

The foregoing is provided for informational use only. Contact your Pioneer sales professional for information and suggestions specific to your operation. Product performance is variable and subject to any number of environmental, disease, and pest pressures. Individual results may vary. Pioneer® brand products are provided subject to the terms and conditions of purchase which are part of the labeling and purchase documents.