Since the introduction of hybrid corn nearly a century ago, corn productivity improvements have continued through the present day. Over the last 20 years, U.S. corn yield has increased by an average of 1.9 bu/acre per year. These gains have resulted from breeding for increased yield potential, introducing transgenic traits to help protect yield, and agronomic management that has allowed yield potential to be more fully realized. 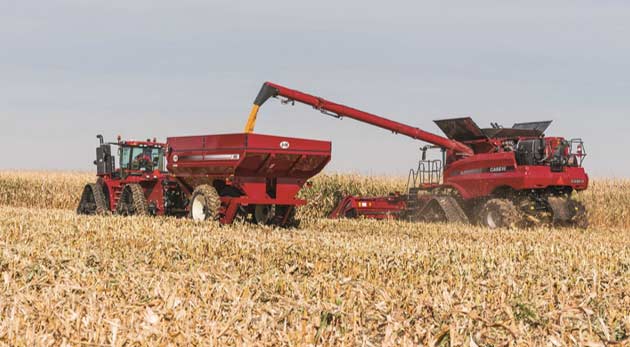 As growers strive for greater corn yields, the National Corn Growers Association (NCGA) National Corn Yield Contest provides a benchmark for yields that are attainable when environmental conditions and agronomic management are optimized. The average yields of NCGA winners are about double the average U.S. yields.

The 2020 growing season was generally an improvement over the widespread challenges of the 2019 season. However, corn yield outcomes varied widely, with highly productive soils often yielding very well, while performance often dropped off on less productive and more drought-prone acres. Results of the 2020 NCGA National Corn Yield Contest reflected recent yield trends. The number of high-yield entries – defined for the purposes of this discussion as all entries yielding over 300 bu/acre – increased considerably from 2019 but was still short of the all-time high set in 2017 (Figure 1).

The geographic distribution of high-yield entries in 2020 was, to some extent, an inversion of the pattern observed in 2019. In 2019, yield results were relatively poor in the central Corn Belt, while the Mid-Atlantic states of Pennsylvania, Delaware, New Jersey, and Virginia posted their best-ever results. In 2020, the central Corn Belt rebounded, with Illinois, Indiana, Nebraska, Ohio, Minnesota, and Wisconsin all showing strong results. No entries topping 300 bu/acre were recorded in either Pennsylvania or Virginia (Table 1). 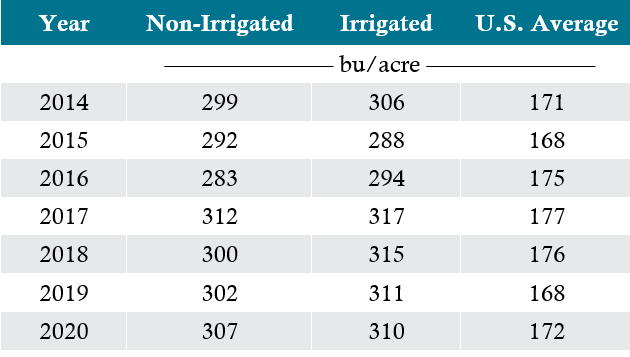 Hybrids tested against each other in a single environment (e.g., a university or seed company test plot) routinely vary in yield by at least 30 bu/acre. At contest yield levels, hybrid differences can be even higher. That is why selecting the right hybrid is likely the most important management decision of all those made by contest winners.

The yield potential of many hybrids now exceeds 300 bu/acre. Realizing this yield potential requires matching hybrid characteristics with field attributes, such as moisture supplying capacity; insect and disease spectrum and intensity; maturity zone, residue cover; and even seedbed temperature. To achieve the highest possible yields, growers should select a hybrid with:

The brands of seed corn used in the highest yielding contest entries in 2015 through 2020 are shown in Figure 2. In all years, Pioneer brand products were used in more entries exceeding 300 bu/acre than any other individual seed brand.

Yields exceeding 300 bu/acre have been achieved using Pioneer brand products from 66 different hybrid families over the past six years, ranging from 91 to 121 CRM. The top-performing Pioneer hybrid families in the National Corn Yield contest are shown in Table 4. The Pioneer brand P1197 family of products has had the best performance in the contest by far, topping 300 bu/acre 84 times since its debut in the contest in 2014. Pioneer brand P1185 and P1563 families of products were top performers in the 2020 yield contest.

Table 4. Pioneer hybrid families with the most entries over 300 bu/acre in the NCGA National Corn Yield Contest over the past six years.

Top performers in the NCGA yield contest not only have produced yields much higher than the current U.S. average, they have also achieved a higher rate of yield gain over time. Over the past 20 years, U.S. corn yields have increased at a rate of 1.9 bu/acre per year while winning yields in the non-irrigated yield contest classes have increased by 5.1 bu/acre per year. Contest fields are planted with the same corn hybrids available to everyone and are subject to the same growing conditions, which suggests that management practices are playing a key role in capturing more yield potential. The following sections will discuss management practices employed in contest entries yielding above 300 bu/acre.

One of the most critical factors in achieving high corn yields is establishing a sufficient population density to allow a hybrid to maximize its yield potential. Historically, population density has been the main driver of yield gain in corn – improvement of corn hybrid genetics for superior stress tolerance has allowed hybrids to be planted at higher plant populations and produce greater yields.

Harvest populations in irrigated and non-irrigated national corn yield contest entries over 300 bu/acre from 2016 through 2020 are shown in Figure 4. The average harvest population of irrigated entries (36,720 plants/acre) was slightly greater than that of non-irrigated entries (36,550 plants/acre) over five years. However, yields over 300 bu/acre were achieved over a wide range of populations, from 28,000 to 56,000 plants/acre, demonstrating that exceptionally high populations are not necessarily a prerequisite for high yields. Although population density is important in establishing the yield potential of a corn crop, it is just one of many factors that determine yield.

High-yielding contest plots are usually planted as early as practical for their geography. Early planting lengthens the growing season and more importantly, moves pollination earlier. When silking, pollination and early ear fill are accomplished in June or early July, heat and moisture stress effects can be reduced.

Planting dates for entries exceeding 300 bu/acre ranged from March 15 to June 3 in 2020. Mid-April to early-May planting dates have typically been the most common for high-yields in the central Corn Belt. The 2020 contest had several high-yield entries planted in mid- to late-May (21 entries over 300 bu/acre were planted after May 15), demonstrating that high yields can still be achieved under favorable conditions if planting is not delayed for too long.

The vast majority of corn acres in the U.S. are currently planted in 30-inch rows, accounting for over 85% of corn production. A majority of 300 bu/acre contest entries over the past five years have been planted in 30-inch rows (Figure 5). This proportion has increased slightly in recent years as wider row configurations (most commonly 36-inch or 38-inch) have declined and narrower row configurations (15-inch, 20-inch, 22-inch or 30-inch twin) have largely remained steady.

Row spacings narrower than the current standard of 30 inches have been a source of continuing interest as a way to achieve greater yields, particularly with continually increasing seeding rates. However, research has generally not shown a consistent yield benefit to narrower rows outside of the northern Corn Belt (Jeschke, 2018). 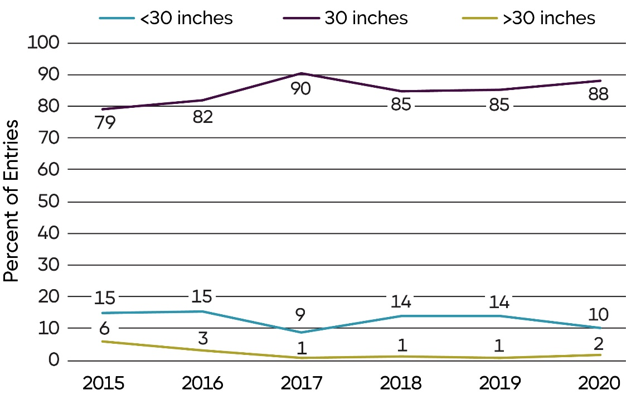 Rotating crops is one of the practices most often recommended to keep yields consistently high. Rotation can break damaging insect and disease cycles that lower crop yields. Including crops like soybean or alfalfa in the rotation can reduce the amount of nitrogen required in the following corn crop. A majority of the fields in the 300 bu/acre entries were planted to a crop other than corn the previous growing season (Figure 6). 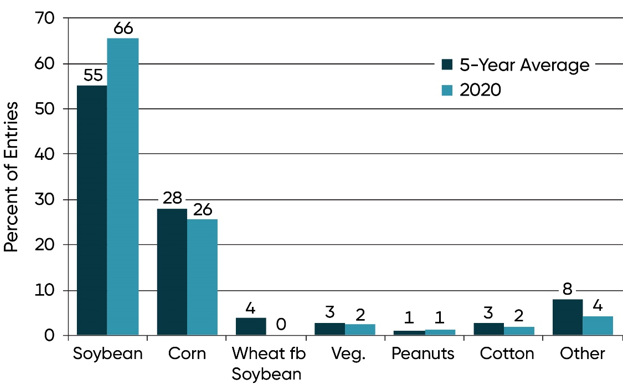 The so-called “rotation effect” is a yield increase associated with crop rotation compared to continuous corn even when all limiting factors appear to have been controlled or adequately supplied in the continuous corn. This yield increase has averaged about 5 to 15 percent in research studies but has generally been less under high-yield conditions (Butzen, 2012). Rotated corn is generally better able to tolerate yield-limiting stresses than continuous corn; however, yield contest results clearly show that high yields can be achieved in continuous-corn production.

Corn grain removes approximately 0.67 lbs of nitrogen per bushel harvested, and stover production requires about 0.45 lbs of nitrogen for each bushel of grain produced (IPNI, 2014). This means that the total N needed for a 300 bu/acre corn crop is around 336 lbs/acre. Only a portion of this amount needs to be supplied by N fertilizer; N is also supplied by the soil through mineralization of soil organic matter. On highly productive soils, N mineralization will often supply the majority of N needed by the crop. Credits can be taken for previous legume crop, manure application, and N in irrigation water. Nitrogen application rates of entries exceeding 300 bu/acre are shown in Figure 8.

The N application rates of 300 bu/acre entries varied greatly, but over half were in the range of 200 to 300 lbs/acre. Some entries with lower N rates were supplemented with N from manure application. As corn yield increases, more N is removed from the soil; however, N application rates do not necessarily need to increase to support high yields. Climatic conditions that favor high yield will also tend to increase the amount of N a corn crop obtains from the soil through increased mineralization of organic N and improved root growth.

Timing of N fertilizer applications can be just as important as application rate. The less time there is between N application and crop uptake, the less likely N loss from the soil will occur and limit crop yield. Nitrogen uptake by the corn plant peaks during the rapid growth phase of vegetative development between V12 and VT (tasseling). However, the N requirement is high beginning at V6 and extending to the R5 (early dent) stage of grain development.

Micronutrients were applied on nearly half of the 300 bu/acre entries (Figure 10). The nutrients most commonly applied were sulfur (S) and zinc (Zn), with some entries including boron (B), magnesium (Mg), manganese (Mn), or copper (Cu). Micronutrients are sufficient in many soils to meet crop needs. However, some sandy soils and other low organic matter soils are naturally deficient in micronutrients, and high pH soils may make some micronutrients less available (Butzen, 2010). Additionally, as yields increase, micronutrient removal increases as well, potentially causing deficiencies.

Pioneer has been leading hybrid corn development since 1920. And is just getting started.

To win the NCGA yield contest, you’ve got to do more than join the Corn Revolution. You’ve got to be a revolutionary.

This year, after a decade of innovation in genetics, breeding, technology and testing, everything came together. Resulting in better results and better returns.

Find the Right Seed Corn for Every Acre

Use our corn seed guide to explore Pioneer® brand corn products that will maximize yield potential on every acre.

¹All Pioneer products are hybrids unless designated with AM1, AM, AMT, AMRW, AMX, AMXT, AML, and Q in which case they are brands.

Pioneer® brand products are provided subject to the terms and conditions of purchase which are part of the labeling and purchase documents.

The foregoing is provided for informational use only. Contact your Pioneer sales professional for information and suggestions specific to your operation. Product performance is variable and subject to any number of environmental, disease, and pest pressures. Individual results may vary.