The yield potential of modern corn hybrids continues to increase, as does the quantity of nutrients removed from the soil as grain leaves the field. A long-term, sustainable fertility program maintains current and future high grain yields. Fertility management decisions include what nutrients to apply, how much of each nutrient to apply, and when to apply these nutrients. Fertilizers must be applied appropriately to support high grain yield, create a profit, and responsibly steward the land to minimize nutrient loss to neighboring waterways and other non-target land areas. The process starts with proper soil testing to determine quantities of available nutrients and then adding fertility to support desired grain yields.

This Crop Insights article will view nutrient uptake from a corn plant’s perspective, exploring how the corn plant regulates nutrient uptake to maintain nutritional balance during the corn plant’s life cycle. Ideal nutrient ratios change as corn growth progresses from germination to maturity. It will also consider nutrient removal as grain leaves the field and suggest a starting point for a fertility program to sustainably maintain high grain yields in future years. 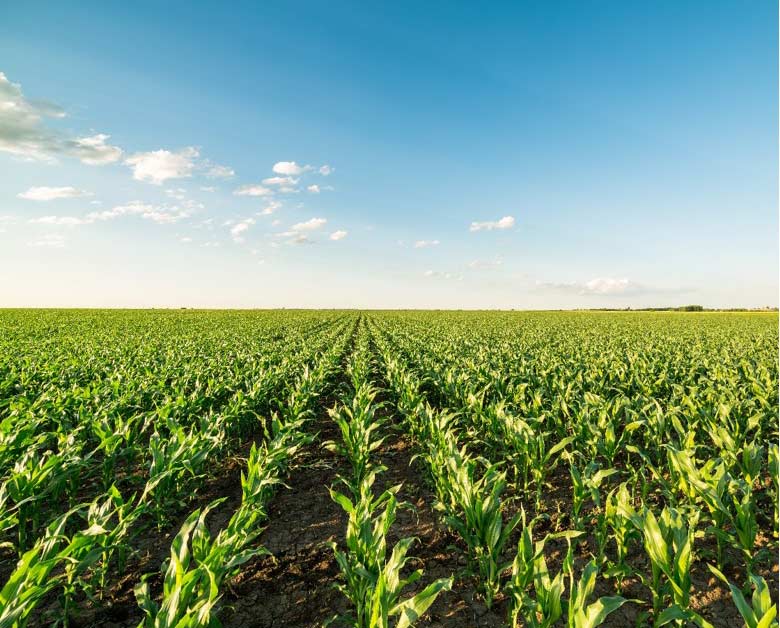 Sources and Quantities of Nutrients

Sixteen nutrients are essential for corn growth (Table 1). Two of these nutrients, carbon and oxygen, are extracted from the air. Hydrogen is extracted from soil water. Corn plants split water molecules into hydrogen and oxygen. Hydrogen is consumed and incorporated into organic compounds such as sugars, starch, proteins, and cell wall materials. Oxygen is either consumed by mitochondrial respiration in the corn plant or is released as molecular oxygen into the atmosphere.

Corn ears contain all thirteen of the soil-supplied nutrients in harvested grain (Heckman et al., 2003) (Table 2). The second column in Table 2 shows nutrient contents on a per bushel basis. Although grain yields vary widely across different environments, nutrient concentrations change very little on a pound/bushel basis. The third column shows amounts of nutrients that leave the field when a 300 bushel/acre yield is harvested and transported for grain. To figure removal rates for other yields, multiply nutrient contents in pounds/bushel times the bushels/acre of grain yield. The fourth column shows nutrient ratios with copper as the base unit of one. For example, for every pound of copper removed in grain, 4100 pounds of nitrogen are also removed.

Table 2. Nutrient content per bushel of corn grain, removal by a 300 bu/acre crop, and nutrient amounts in corn grain as a ratio relative to copper (Heckman et al., 2003).

The remaining three essential nutrients – carbon, oxygen, and hydrogen – are also present in grain. The corn plant’s chemical composition consists of 44% carbon, 45% oxygen, and 6% hydrogen along with the thirteen soil-supplied nutrients (Latesha and Miller, 1924). For a 300 bushel/acre yield, approximately 6,300 pounds of carbon, 6,400 pounds of oxygen, and 850 pounds of hydrogen are transported as grain. The organic matter composition of this amount of grain contributes about 25.9 million calories of energy to food and feed chains as this grain is consumed in different feed, fuel, and industrial products.

Regulation of Nutrient Uptake In Corn

In order to understand how the corn plant regulates nutrient uptake, it is necessary to first understand some basic corn anatomy. Figure 1 shows two different views of a corn root.

The outermost layer of cells – the epidermis – is in direct contact with surrounding soil. Just inside the epidermis, represented by the green ring, is the cortex. The cortex is several cell layers thick. One of its functions is to temporarily store nutrients as these nutrients move from soil to corn roots. Initially, when nutrients enter corn roots, these nutrients are retained in “non-living” spaces between cortical and epidermal cells. Nutrients enter the “living portion” of the corn root when they cross a cell plasma membrane (represented by the black circle). These nutrients are now in the central core or stele of the corn root. Once inside the stele, nutrients move into xylem vascular tissue and translocate as needed to all parts of the corn plant such as the stalk, leaves, ears, and grain.

Two types of regulatory proteins – called HATS and LATS – are located in plasmodesmata (Figure 3) (Glass, 2002). HATS stands for high affinity transport system proteins. These proteins select nutrients that are present in very low concentrations in the outer portion of the corn root and transport these nutrients across the plasma membrane. HATS proteins supply sufficient nutrient to keep the plant alive if the concentration of a nutrient in the soil is very low. However, HATS proteins cannot transport enough nutrient to meet demands for high grain yields. Corn plants stay alive but may still show nutrient deficiency and potential yield loss because nutrient supply does not meet nutrient demand. LATS (low affinity transport system) proteins supply the biochemical power to transport sufficient nutrients across plasma membranes to meet demands for high grain yields. LATS proteins are most efficient when nutrient concentrations are relatively high in soil.

According to our current knowledge, specific HATS and LATS proteins tend to bind selectively to particular nutrients. There is a specific type of protein that matches each of the nutrients; however, not all proteins are entirely nutrient specific. For example, the chemical structure of a regulatory protein binds semi-selectively to calcium (Ca2+). However, other divalent cations such as magnesium (Mg2+) or zinc (Zn2+) may also bind to and be transported by this same regulatory protein. This lack of complete specificity may partly explain why nutrient concentrations tend to have a range of values in harvested grain or why some nutrients are present in “luxury quantities” in the corn plant.

Uptake of each nutrient is regulated independently. If a soil has high nitrogen fertility but is low in sulfur, LATS proteins will efficiently take up and transport all of the nitrogen needed to support grain yield. However, in a low sulfur soil, there is insufficient sulfur for the LATS to work efficiently. HATS proteins therefore conduct the majority of sulfur uptake and transport. These HATS proteins supply whatever sulfur they can to support growth, but they cannot meet the high demand to support maximum growth. The end result is the corn plant will express sulfur deficiency.

Figure 3. Regulatory process for nutrient uptake to support corn growth. Review letters below for more information on each step.

(Click here or on the chart above for a larger image.)

Ratios of Nutrient Uptake Change During The Growing Season

HATS and LATS regulatory proteins adjust amounts of nutrient uptake and nutrient ratios during the entire growing season. As the corn plant matures, rates of uptake of some nutrients are faster than for other nutrients, thus changing the ideal nutrient ratio for corn growth at different growth stages. Scientists at the University of Illinois have published research showing how nutrients accumulate during the corn life cycle (Bender et al., 2013) (Figure 4A-4G).

The corn plant acquires very few nutrients during pollination, probably because the corn plant is devoting the majority of its resources to support successful pollination and fertilization of embryos. Nutrient uptake during reproductive growth is most active between R2 and R4. The corn plant accumulates a substantial portion of its total carbon, sulfur, boron, manganese, and copper during this growth phase. In addition, the corn plant moves some of the nitrogen, phosphorus, potassium, magnesium, sulfur, and zinc from vegetative leaf and stalk matter to the developing grain.

Between R4 and R6 (maturity) the corn plant acquires nearly 20% to almost 40% of the total carbon, nitrogen, phosphorus, potassium, magnesium, sulfur, zinc, and copper during late-season grain fill. Accumulated carbon during R4 to R6 is deposited in the kernels. Grain fill during R4 to R6 accounts for approximately 25% of the increase in total weight of the corn plant at maturity. Figure 4G also illustrates what percent of the total nutrient acquired by a corn plant during the growing season is present in the grain. As this grain leaves the field approximately 80% of phosphorus, 62% of zinc, 58% of nitrogen, 57% of sulfur, 34% of potassium, 32% of magnesium, and 30% of copper also leaves the field and is no longer part of your future soil fertility program.

A successful nutrient management plan is one that assures there is enough of every nutrient in the soil to support corn growth at each developmental stage to meet the targeted grain yield. Maintaining adequate fertility levels of all nutrients during the entire growing season is more important than fertilizing for specific nutrient ratios because HATS and LATS regulatory proteins continuously adjust nutrient uptake to provide maximum yields allowed by the growing environment.

Additionally, a successful nutrient management plan needs to be sustainable and consistently support high yields in future years. A fertility program will include replacement amounts of nutrients that leave the field as the crop is harvested and will also include additional fertility to increase soil reserve fertility levels as your budget allows. A place to start when calculating replacement amounts of nutrients is to multiply the nutrient contents listed in pounds per bushel (Table 2) by the most recent corn yield. This information, in combination with soil test values helps to define a profitable and sustainable fertility program.