Soybean growers are striving for higher yields. The question is which management practices can help them raise yields. To find out, Pioneer agronomists evaluated intensive soybean management practices on farms in Nebraska, Kansas and western Missouri in 2013 and 2014. They gathered data from 457 locations where growers were producing high yields to learn which practices are contributing most to production increases.

Soybean aphid management. For an insecticide application to provide an economic benefit, it is recommended to treat only if populations exceed the economic threshold (ET). For soybean aphids, the ET is currently established at 250 aphids/plant (average of 20 to 30 plants/field) during the R1 to R5 growth stages. If this threshold is exceeded, treating within 7 days is required to prevent populations from reaching the Economic Injury Level (EIL) where yield loss exceeds the cost of treatment. 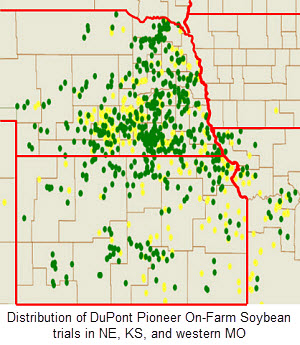 Here are the factors that helped boost yields in these fields.

“We found early planting dates tend to result in higher yields,” says Jon Propheter, Pioneer field agronomist. “Planting the first week of May resulted in the highest yield levels.” Planting May 6 vs. May 20 resulted in 4 additional bushels per acre on average.

However, basing planting on a strict calendar date is risky, Propheter says. For ideal emergence, the soil should be at least 60 degrees F with a forecast of warming weather. Cool, damp soils and cold weather are a recipe for lower yields. In this study, 98% of growers used the Pioneer Premium Seed Treatment offering to protect against early-season stresses.

The best yields came when growers planted an average of almost 175,000 seeds per acre. In general, strip-till and ridge-till production outyielded minimal tillage and conventional tillage by 4 to 6 bushels and outyielded no-till production by up to 9 bushels in high-yielding, high-residue level fields.

It’s easy to overlook soil fertility in soybeans. Research indicates the level of nitrogen (N) in the soil, combined with the N fixed by the soybean plant, is sufficient for yields of 60 bushels per acre. If a grower is targeting higher yields, the crop may require more N.

One caveat about N: If growers supplement too early, the plant may use nitrogen to drive vegetative growth rather than reproduction. If N is too abundant early in the growing season, the plant may not trigger its nitrogen-fixing mechanisms. This situation can result in the plant lacking the ability to fix enough N late in the season for optimum seed fill.

“In heavier soils with higher levels of organic matter, supplementing N early in the season doesn’t provide a consistent response,” Propheter says. “However, data suggests that applying N in-season on soils with lower organic matter can raise yield levels.” N applications from full flower to early pod set stages may be valuable in soils that cannot provide additional N from organic matter for high level yields. In the 2013-14 trials, growers who supplemented N in-season averaged 4.5 bu/A higher yields than those that did not, within a geographic area.

Propheter notes soybean plants take up 88% of the phosphorus they need from full bloom to soft seed stages. Likewise, they acquire 83% of the potassium they need during these stages, based on research where 100-plus bu/A yields were achieved.

“We may need to reevaluate our nutrient critical levels and application methods to obtain significantly higher yields. We have found that growers with soil test phosphorus at 30 ppm or higher and potassium at 300 ppm or higher tend to consistently produce higher yields,” he says.

Sulfur is another important nutrient growers need to consider for some fields.

“We don’t have to target specific individual pest threshold levels,” Propheter says. “We seem to be getting a cumulative improvement in insect damage control.” Yield responses from fungicide applications have been variable from year to year, but the combination of foliar fungicide and insecticide offers the biggest bang for the buck.

A critical factor many growers seem to struggle to manage is harvest timing. When growers can harvest at 13% to 14% moisture, yields are substantially higher than when they harvest at 9% moisture.

“Growers should make harvest timing a priority,” Propheter suggests. “One way is to spread maturities so all their soybeans aren’t reaching optimal moisture levels at the same time. They can harvest shorter-season varieties first.”

With larger combines and draper heads, growers can power through and harvest soybeans when they’re a little greener than normal at harvest. This can add bushels per acre.

Greater Than the Sum

Most growers who are producing high yields – 90 to 100 bushels per acre or more – have adopted several, if not most, of these practices.

“The key message is that we have to do not just 1 of these things, but all of them to produce really high yields,” Propheter says. “The 2013 and 2014 studies show that these practices can help lift soybean yields above plateaus that seemed to put a ceiling on soybean yields.”